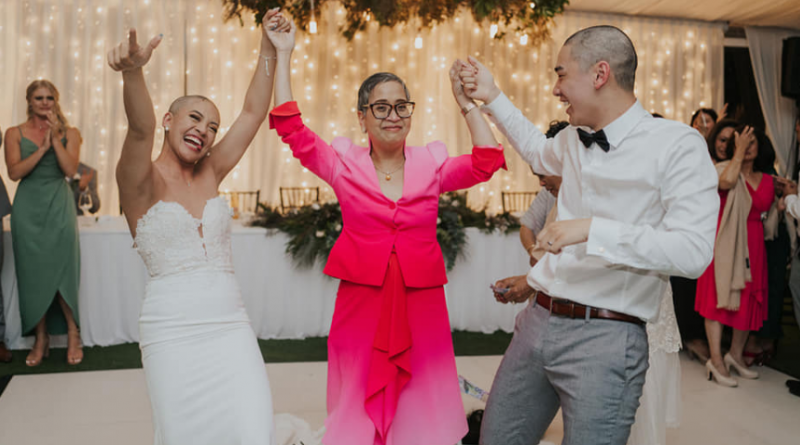 How much do you love your mother? At a wedding in New Zealand on November 21, 2020, the bride and groom have shown a sweet gesture to ease the struggles the bride’s mother has been going through.

During the reception, Jony Lee, the bride, suddenly announced that they are not doing the money dance but will do something different. She added that all the money they are supposed to receive for the Filipino dance will be given to a worthy institution. This puzzled the audience.

She then held a tool on her hand and said that they are going to shave their heads. The guests were shocked. Jony started shaving her husband’s head and she had Alistair, her husband, do the same too. The reason? It is to show solidarity to the bride’s mom who had been fighting the Big C for a while.

“We love you so much and we want to show our – what’s the word? – solidarity to you,” Jony said.

Her mom Luna Macapagal was diagnosed with the big C in her ovary  and had been going through different treatments to overcome it.

The room was filled with different emotions. Jony was happy about it. Her parents, especially her mom, were proud of her. Trs were seen falling as guests opened their wallets and gave their donations. The young couple raised $1,400 that night. But then days later, guests still continued to donate raising the funds to $2,000.

The couple continued their endeavor and set up a fundraising campaign at Give a Little. It closed in a month and earned $3,350 cash donations.

“No amount of time was ever gonna be enough. I can’t wait to see you again. I really miss you, mammy,” Jony posted on Facebook.

She may have left earlier than expected but we believe she had lived the last days of her life happily. Aside from fulfilling her dream of seeing Jony get married, she was also able to attend her other eldest daughter’s wedding held in the same year.