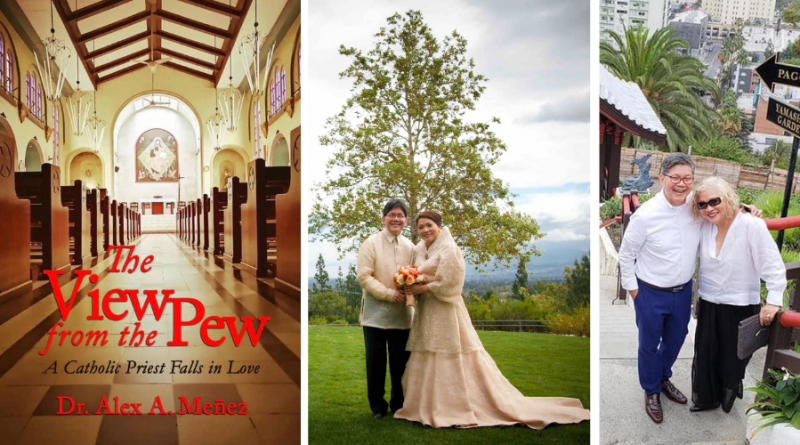 Priests are ordained to be servants of God. Once a man entered priesthood, he will wholly gave himself to teach the Gospel and administer the Sacrament among others. Upon becoming a priest, as a servant of God he will abstain from any kind of intimate relationship with other people; he’s not allowed to get married.

But what if a priest then falls deeply in love with a woman? Is he allowed to feel this attraction? Will he be dismissed from priesthood?—all of these questions were answered in the book titled “The View from the Pew: A Catholic Priest Falls in Love,” written by Dr. Alex Meñez, who shared his story about leaving the priesthood to marry the woman he loves.

Before entering priesthood, Alex was a Doctor of Canon Law from Kalibo, Aklan. In 1970, he was ordained and then he moved to the Archdiocese of Los Angeles, California in the year 2000.

He shared his love story via Philstar Life and gave a glimpse on what could be read in his book. According to him, he first met the woman who captivated his attention and feelings while saying Mass.

“She came in during the readings. Latecomers are pet peeves of every speaker as a general rule, and to come in late for Mass is inexcusable to say the least. But my reaction was different,” said Dr. Alex.

He then got to meet her for the second time to bless her car. Alex then got to know her name, Espy (short for Esperanza) de Vega. They became acquainted and Alex became part of Espy’s family, “they took me in as their elder brother. Invitations to family gatherings were always a joyful expectation.”

In 2008, eight years after they first met, Alex and Espy both admitted their attraction and their feelings were becoming more than friendship. These overwhelming feelings made Alex decide to leave the priesthood.

“When I fell in love, I had to decide to leave. Precisely because I could not be honest to myself and the people I served, and the God who knows my innermost heart. I do not love Christ less by falling in love. Jesus knows how much I love him still. Can I not love Jesus as a layperson? And will Jesus love me less when I am no longer a priest?

After 40 years of serving the church as a priest, he was granted permission to officially retire from his priestly ministry in 2008. After nine months, he was then granted dispensation from “all obligations arising from sacred orders, including the law of celibacy” by Pope Benedict XVI.

In 2011, Alex and Espy got married at the St. Bartholomew Catholic Church in Long Beach, California. They will be celebrating their 10th year wedding anniversary this March.