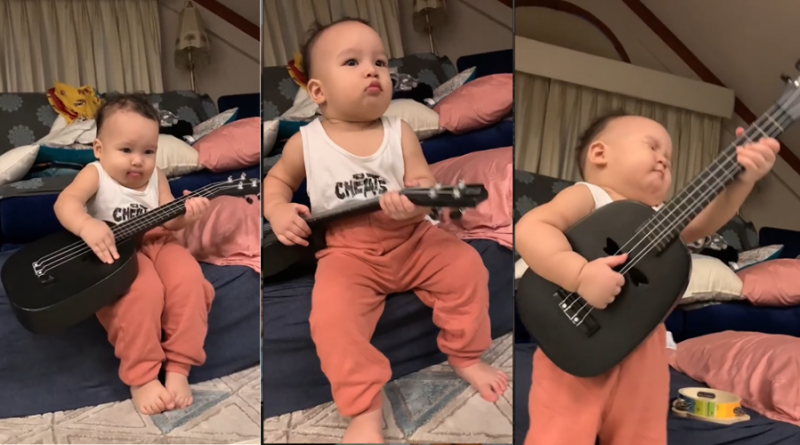 Many kids are deemed to become a musical genius at an early age because of  how well they play musical instruments or even sing in an almost-perfect tone. A kid’s talent may come from the family’s gene—especially those who are musically inclined.

Vito Magalona-Bacarro may be one of those kids who were born to become a musical genius one day! Both his parents, Saab and Jim, are members of Filipino indie rock band named “Cheats.” Aside from his parents, 15-month-old Vito is the grandchild of the late iconic Filipino rapper, Francis Magalona; also known as Francis M.

With more than 600,000 followers on Instagram, Saab shared a video of baby Vito while holding a ukulele and pretending to be playing it with the facial expression of rocking it out.

“Vito YOLO. Happy New Year! I see you guys enjoyed Vito’s Radio Gaga performance over at @jimbacarro’s feed so I thought I’d share this too. I think he asked to play this 10 times straight today. LOL. He is 15 months old,” read the caption of Saab while uploading a video of baby Vito.

In a separate video, Vito was seen stumbling because of “too much rock n’ roll” but somehow managed to continue pretending to play the ukulele and giving the facial expression of someone enjoying his music.

One netizen commented: “Super cute. Certified rakista.” Many netizens pointed out the cuteness of baby Vito and his potential of becoming a musician someday.

Vito is Saab and Jim’s second son, and their first-born son is Pancho who is also featured in his parents Instagram feed. Click here to watch Vito’s rock n’ roll video.