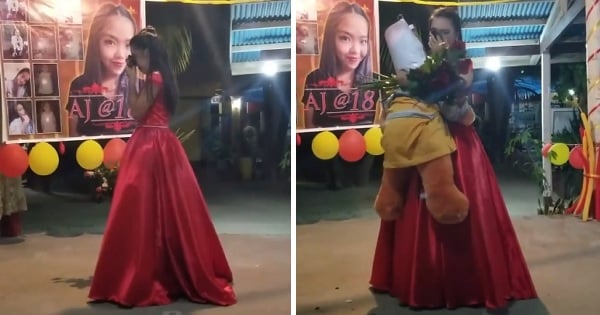 Turning 18 years old is a huge milestone in a person’s life because at this age, one is already considered an adult.

Many mark their children’s 18th birthday with a big party, with young ladies having a grand debut. During the debut, there’s the 18 roses dance that is almost always concluded by a father-daughter dance.

Depending on the family’s or the debutante’s choice, the 18th rose might be given by her boyfriend or father. If the 18th rose is a boyfriend, then they have a moment to dance together and the father later cuts in for the father-daughter dance.

Many times, though, the father is the 18th rose and he gets to enjoy this big moment with his beloved daughter.

But what if the debutante’s father is no longer around? That’s a really sad thing but the dad’s place might be taken by a brother, grandfather, or another man who stands as father figure for the birthday celebrant.

For debutante Aljean Degamon Legaspino, however, no one could ever take the place of her father. So, on her debut party, she still danced with her ‘father’. Because he was no longer around, they had a photo of his face printed and placed on a large teddy bear.

A friend took a video of the heartbreaking moment and posted this on social media where it went viral.

A heartwarming “Dance with HER Father”

It was rather heartbreaking to watch and it made a lot of netizens cry… Many netizens commented that they could easily relate with Aljean’s experience after also losing a loved one before a big event.