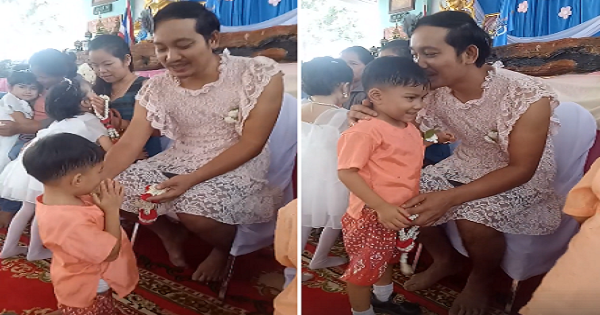 In an event honoring mothers, one dad dressed up in a pink dress and wore a ribbon his hair so his kids won’t be left out because they were the only ones who didn’t have a mom. While many thought it was a bit embarrassing, others praised this dad for doing his best for his kids.

Dad-of-two Chatchai Parn-uthai has been separated from his wife for 2 years now. As a single dad, he struggles on a lot of things but makes sure to give his kids the best of what he can, despite the difficulties he might experience.

Knowing that his kids would feel left out because they were the only ones not attending the Mother’s Day event in school, Chatchai decided to become their ‘mother’ for the day.

In Thailand, Mother’s Day is celebrated on August 12 in honor of the birthday of Her Majesty Queen Sirikit, the Mother of all Thai people.

Schools celebrate the event ahead of time; thus, Chatchai’s sons needed a mom to be in school for them to attend the Mother’s Day event last August 10. Knowing the children’s mother could not attend the occasion, Chatchai dressed up in a pink dress and donned a ribbon on his hair.

It was a bit hilarious but Chatchai didn’t feel embarrassed at all. He knew that this was the least he could do for his kids.

“I am a single father with two children. For my son, I can do anything.

I don’t want my children to feel inferior and hope they can be happy. I didn’t feel embarrassed for wearing women’s clothes. It’s because I love my children very much. As long as I can see them smile, everything is worth it.”

Someone uploaded a video of ‘Mommy’ Chatchai – and it quickly went viral, gaining over 5 million views within just a few hours!

Netizens praised Chatchai for being a good father to his children, saying that it is definitely rare to find a guy who would willingly do this so his children will be happy.