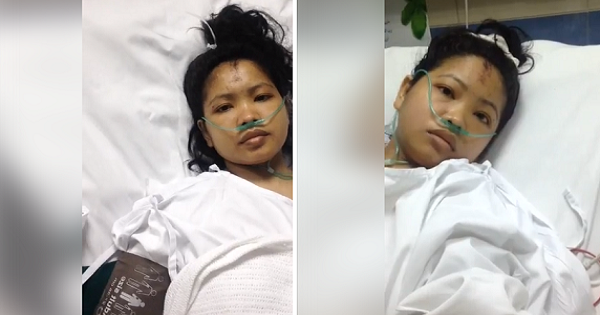 Despite the Memorandum of Understanding (MoU) between the Philippines and Kuwait that intends to protect the welfare of OFWs, there are still a lot of times when overseas Filipino workers (OFWs) working in this foreign country are treated badly by their employers, especially those working as domestic helpers.

While repatriations continue to be in full blast, more domestic workers are escaping from their employers and seeking refuge at the embassy or hoping that they might find help from kind people.

Recently, another domestic helper had to jump from the third floor of the building she was working in, to escape her employers.

Gina Agustin Aguilar is a 28-year-old domestic helper working in Kalha, Kuwait. She hails from Kabacan, North Cotabato where she left behind 2 children in her quest to provide them a better future.

But the rosy dream turned into nightmare for the young mother who felt it was best to escape her situation by jumping from the third floor building. She ended up with broken ribs, a broken heel, and a spinal injury but was lucky to be alive.

She was rushed to Amiri Hospital in Kuwait City where she received treatment for the scrapes and bruises she sustained from the incident. She also had to undergo surgery.

Thanks to kind-hearted Filipinos who helped Gina, she received assistance from the hospital.

Jovelyn Valiente Nobleza was among those who helped the young mother, visiting her at the hospital and sharing her plight on social media so her family will know what happened. This also paved the way for Gina to find help from the government.

Sadly, it was reported that Gina was told by her agency to delete the videos. She was also prohibited from showing her face to the media but Jovelyn ignored the agency’s instructions, knowing that Gina’s plight will only be heard more quickly if she goes viral.

(I am the one at fault. Videos are prohibited. The agency told me to erase it; I ran away, I jumped.)

Her story was shared on Newsline.ph, with the news site also calling Special Assistant to the President (SAP) Christopher Lawrence Go and Labor Secretary Silvestre Bello III to report the situation.

It’s a good thing her plight went viral on social media as she was able to immediately find help.