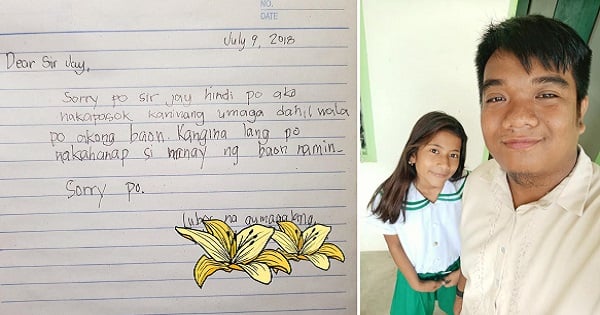 It is a heartbreaking reality in the Philippines that many students have to go to school on an empty stomach, with no money to buy snacks or lunch, and walking several kilometers because they had no money for fare.

Sometimes, when the school is far or it rains and the students don’t have money, they are forced to skip a day or two.

Last July 9, one of his students in his Grade 8 advisory class was absent. He later saw the student after lunch time and this student shyly handed him her excuse letter.

Indeed, it was heartbreaking that the student had to be absent because her mother didn’t have money to give her as baon for school that morning.

The teacher was moved by the experience that he shared about it on Facebook where it went viral. A lot of people took pity on the student, with many saying that they also experienced this back when they were in school.

Then, there were those who wanted to make sure that the student never goes absent again – they sent Sir Jay money for this kid! Wow.

After a few days, Sir Jay posted a photo of him and the student to thank the generous donors who made sure that this kid’s baon is taken care of for the rest of the school year.

It’s truly great that social media has become a useful tool in helping send our poor students to school.