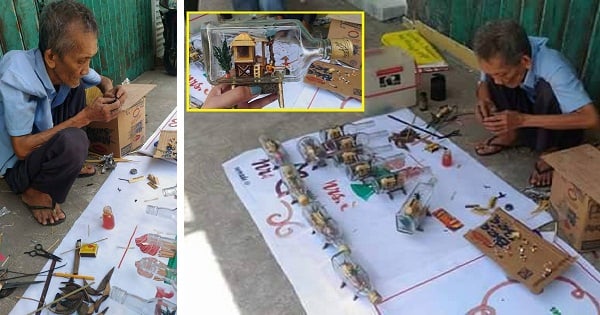 An old man has gone viral on social media after photos of him creating ornaments of “bahay kubo” made from indigenous materials and placed inside glass bottles were shared on several Facebook pages.

According to Trending Pinoy Videos on its Facebook page, the old man could be often seen around Sequel near the Holy Cross of Davao College, Sta. Ana Avenue in Davao City, southern Philippines. Every day, he would make those crafts on the sidewalk – and anyone could watch him do it.

A lot of netizens couldn’t help but comment how this old man deserves to have his goods sold old out – especially because he actually sells them so cheaply at just Php80 ($1.70).

There are many social media users who expressed willingness to buy the crafts made by this old man but they just can’t do it because he lives in Davao City which is a 2-hour plane ride away from Metro Manila. It is with great hope that these netizens wish there would be someone who would help the old man sell his crafts online so they could order some for their homes.

Indeed, such would be a great help to this old man. We also hope the local government will notice the viral post so they can give him assistance in selling his craft outside Davao City.