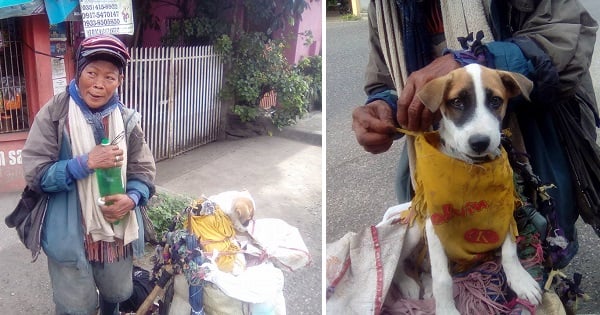 Parents would do anything and everything to care for their kids – even if that meant walking across the world to find them, in case they get lost.

One old lady in Negros island in central Philippines has impressed netizens with the way she searched for her missing child – by going from town to town in the island, in hopes of finally finding this lost son or daughter.

Not much is known about this old lady, expect that the locals thought she was crazy because she was wandering in the streets with her belongings inside plastic bags. She was wearing several layers of clothes, despite the sweltering heat.

What caught netizens’ attention and made her different from other wandering homeless people is that she had dogs with her that were dressed in clothes, as if they were her kids instead of just mere pets.

Sheen predicted that the old lady might soon reach her hometown, Tanjay City. She told her father about it.

Some days passed, Nelson Buquiran (Sheena’s dad) really saw the old lady in Tanjay City! He talked to her and learned that she had gone from town to town to search for her missing child, to no avail. She is on her way to Bacolod City, some 180 km away!

After Sheena posted the old lady’s photos, several netizens from across the island shared that they had also seen this same old lady and her dressed-up dogs at their town. Amazingly, it seemed that this old lady had been on a walking tour around the island!

She was spotted as far south as Sta. Catalina, located 100 km south of Dumaguete City! She was also spotted in other areas south, closer to Dumaguete; though she was also seen in Pamplona, a town 16 km away from Tanjay City.

In her search for her child, this old lady has logged at least 150 km – and that’s only based on the comments on Sheena’s post! It is possible that she had gone through more than those kilometers, since she was also seen in interior roads, not just in highways.

Sadly, everyone thought she was crazy and just ignored her. No one also thought to ask for her name and where she was from, as well as the name of the child she was looking for.

Now that her story has gone viral, though, we hope she would soon find better help on social media so she can finally meet this unnamed child.