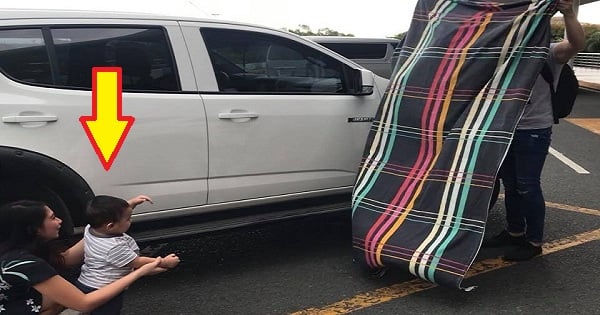 Each day, thousands of overseas Filipino workers (OFWs) bid their families goodbye at the airport. Many end up crying because it really is difficult to say goodbye, knowing you won’t be able to be with your family for the next couple of years.

Knowing how heartbreaking it can be to pry yourself away from a crying toddler, one OFW dad found a way to bid goodbye without the tears – by using the ‘vanishing’ magic trick that a lot of people have used on their dogs in recent viral videos.

In the video he posted on his Facebook account, Nafson Tolentino shared the clever technique. Using a blanket, Nafson hid from his son before revealing himself by putting the blanket down.

While the boy, estimated to be around 1 year old, was not very much interested with the ‘magic trick’, he did look confused when the blanket fell the second time and his dad was no longer behind it.

The OFW, who was headed for Canada, had quickly run behind the vehicle as the blanket fell to the ground. The kid didn’t cry that dad was gone because he was rather confused with the trick.

While many OFWs praised the trick and said they might try it with their own kids, a lot of people slammed the ‘trick’ and warned the OFW that this might have a lasting psychological effect on the kid.

But many others suggested that it is still best not to let your family send you off at the airport because it is much easier to bid them goodbye at home where they can be distracted with a lot of things instead of just waiting for you to walk towards the gate one last time.

Indeed, it is always painful to say goodbye to family, especially when there are small kids, but OFWs have to do it. Kudos to all OFWs and their families! Stay strong always…