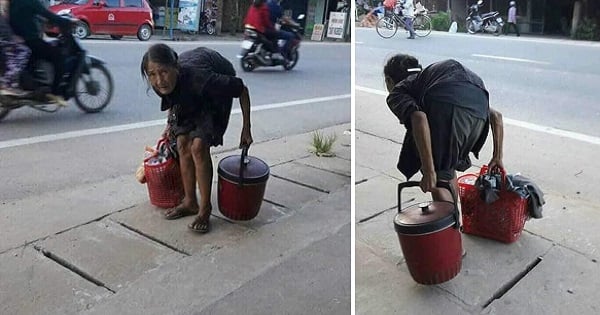 It is a sad reality in life, especially in the Philippines, that there are still a lot of old people who are working and putting their frail bodies at risk by selling in the streets to earn money for their families.

Of course, there’s nothing wrong about old people working – that is, if they are working in safe places that don’t them at risk of getting hit by cars or making them walk the streets, carrying heavy items to sell under the heat of the sun or in the rain.

Charles Kenneth Gamalo Capricho shares photos of an old lady, bent over and obviously trying hard to carry the heavy food baskets filled with puto she needs to sell to earn money.

In these photos, the old lady looked like she was having difficulties walking with that load yet she didn’t complain; instead, she just went on and sold the items for her family.

For this, Charles was touched. He took the photos to remind everyone to be happy with the lives we have, knowing that there are people like this old lady who are having a more difficult time than what we are experiencing.

He also praised the old lady for being hardworking – something that a lot of netizens agreed with; however, a lot also slammed this old lady’s family for letting her work when she is obviously old and frail. People as old as her deserve to stay at home and rest, while their kids and grandkids should be the ones to support them, right?