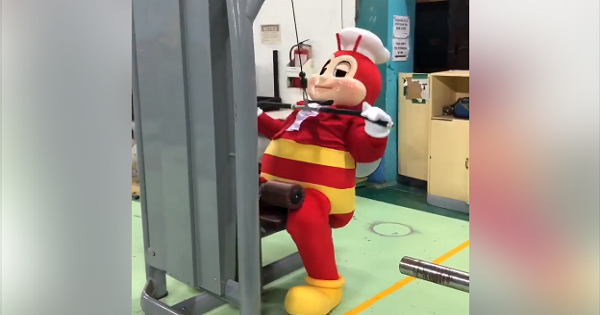 Jollibee might just be a brand, a mascot, but Filipinos love him, anyway. There were a number of times when Jollibee (or obviously someone wearing a Jollibee mascot outfit) got caught in various situations, including having a dance-off with McDonald’s crew, getting caught by a traffic cop for not wearing a helmet while riding a motorcycle, and many other hilarious antics.

But netizens are once again laughing at the video of Jollibee working out at the gym!

It seems that all the calories he stored in his body after eating the delicious food items sold at the store had gotten Jollibee so fat that he decided to work out.

At the gym, Jollibee was so good at what he’s doing that a lot of netizens were quite impressed! At the end of the workout, he stood up and didn’t even appear tired over what he did – and didn’t even perspire! LOL.

For this, many netizens couldn’t help but admire the bee, saying Jollibee has not become a role model, a ‘fitspiration’!

Of course, there is zero chance that the bee mascot would ever slim down for real, it’s just a fixed figure made from cloth and plastic, but it was cute that he made a lot of people think about hitting the gym.

But some also posted photos of a slim, tired looking Jollibee and said he had too much workout. Ha! That’s quite hilarious.

What do you think of Jollibee working out at the gym?