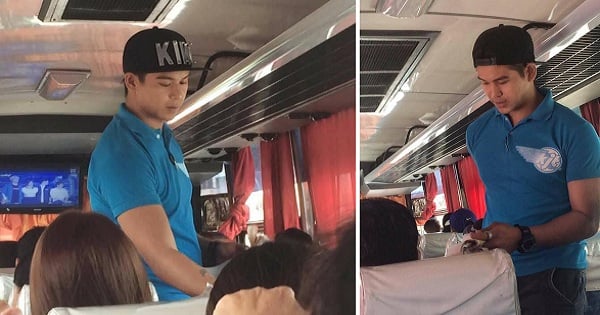 It is said that you will often find love in the most unexpected places – and if you’re still looking for love, you are surely on the lookout for the ones who will capture your heart.

Well, netizens are fond of doing just that, then posting their finds on social media.

We’ve seen a lot of hunky guys and gorgeous girls going viral on Facebook or Twitter for their good looks. More often than not, these viral internet sensations were just spotted by netizens as they did ordinary, regular things.

For instance, there was Carrot Man who was just spotted as he was carrying a huge basket of carrots by the street. There was also Badjao Girl, the beggar Badjao girl who rose to fame because of her gorgeous looks – as people don’t really expect beggars to look this good!

In Pasay, a bus conductor went viral for his handsome face. The post appeared on HugotBeki, a Facebook page dedicated to gays but also has a huge following of ‘straight’ girls and some guys.

While this hunky conductor was not named on the page, the netizen who shared his photo posted several angles to prove just how handsome he is.

The page captioned the photos:

A lot of bekis (gays) and ladies agreed that this guy looks handsome, indeed. Others said he does look ‘yummy’ – and many joked that they are willing to ride every bus in Pasay just to see this guy. LOL.

That is, of course, exaggeration on their part but the post did make a lot of people laugh. What do you think of this guy?