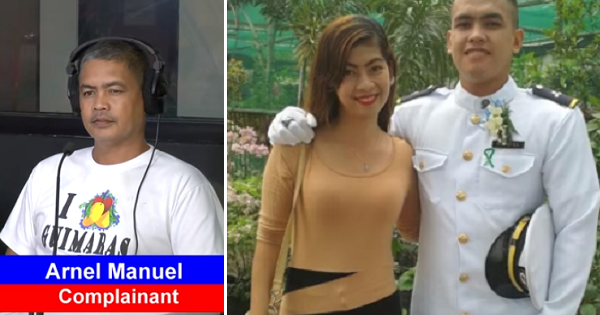 Day after day, hundreds of people flock to TV5 to seek help from Raffy Tulfo for various problems. The veteran broadcaster has helped a lot of people from all walks of life, especially OFWs.

But not everyone who goes to Tulfo’s program receive the help they wanted. In fact, there are those who earned his anger, instead!

Take for example one dad who went to the show to seek help from Tulfo to stop his son’s marriage but he ended up getting the receiving end of the broadcaster’s anger.

Arnel Manuel went to Tulfo to complain against his son Arvin’s girlfriend, Jenny Calma, who was supposedly forcing him to marriage. According to Tatay Arnel, his son is still in school and is actually having his apprenticeship aboard a boat but Jenny and her family were allegedly trying to make him get off the boat so the two could get married.

Of course, any parent would have felt angry over that situation – until they heard Jenny’s side of the story.

Jenny revealed that the only reason they went to Arvin and his family to talk about marriage is that he had gotten her pregnant. Jenny and her parents were willing to support the child, especially because she had a job while Arvin was still studying; however, he and his dad suggested that she get rid of the baby because it was a ‘problem’!

This angered the Calma family who view the baby as a blessing. It came to a point when Arvin would now ignore Jenny, not returning her calls. Then, he told her that he would only get the baby but not marry her – and that’s really hurtful to her.

Angered over the betrayal and the Manuel family’s move to shame her in public by going to Tulfo, Jenny revealed that she was not after the family’s money. In fact, she and her family had not only helped send Arvin to school but would also lend the family money during emergencies – and Tatay Arnel admitted that was true but they supposedly paid her back. But this angered Tulfo even more!