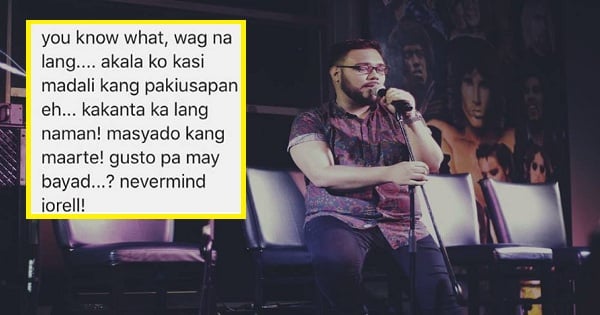 Filipinos love to help one another, especially in special occasions like weddings but while many would readily volunteer their services for free at a close friend or relative’s wedding, it is generally not accepted to ask someone to do something for free on your wedding if you are not even relatives or close friends!

As a professional singer, Jorell Canuel has sang at various gigs, including weddings but he had also experienced having people ask him to sing for free. It seems that many people have this notion that just because he’s a singer and they knew him, then they don’t have to pay for his services when they ‘invited’ him to special occasions.

One such ‘friend’ messaged Jorell lately, to ‘invite’ him to her upcoming wedding in December. This ‘friend’ was actually just a seatmate he had in college but the woman was confident enough to think he would sing for free at her wedding, just because she invited him to the event.

Remember those recent viral stories about ‘Bes’ asking money from their ‘friends’, then blocking them if they don’t get the money? Well, that’s what happened to Jorell as well.

This unnamed woman chatted up with Jorell and he expressed surprise because the two of them hadn’t really talked for the past 9 years. After all, they were really just seatmates in college, not friends.

The woman invited him to her wedding; again, Jorell was surprised at this – until she told him she wanted him to sing at the event. She even told him to bring along his friend, Vince.

But the woman would soon balk when Jorell told her the talent fee will be higher if she also wants this Vince as singer since there would two of them now; she asked Jorell if it was possible that he do it for free, especially because he’s invited to her wedding.

She added that he wouldn’t really become tired because he’ll just be singing a couple of songs during the ceremony and reception!

It seems that this bride believes Jorell was actually lucky to have been invited to her wedding – is she a celebrity or something? LOL.

When Jorell insisted that his services aren’t free, the woman blocked him mid-chat.

This is really crazy, right?