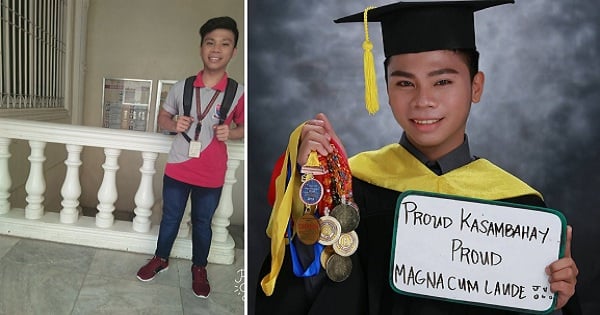 When he was young, Jarel Barcelona Tadio never told anyone his dreams about what he would become when he grows up. Due to their poor status in life, he knew that his parents could never afford to send him to college. Completing his high school education was even questionable.

But he was finally able to reach his dream, he was so excited over his accomplishment that he wrote a lengthy post on Facebook to share his experience so as to inspire other dreamers like him.

One time they asked me, Jah anong gusto mo paglaki?

In reality, he had dreams but was too afraid to voice them out because he was so sure that he will never get to accomplish these in the future. As far as he was concerned, the future was bleak for someone like him.

“Nuong patapos na ako sa high school, one time, my classmates were talking about the school they intend to enter in College.

Indeed, after graduation, he tried his best to find a job but was only accepted at a catering company where he was hired on an on-call basis; the salary was also quite small. After 2 months, he quit. Then, he became a kasambahay (maid).

As a kasambahay, he had everything he needed; he really didn’t have to worry about a thing, except to please his employers by doing his job well. But after a year of being a kasambahay, he realized that this was something that he doesn’t want to be for the rest of his life.

While life as a kasambahay was ‘easy’ and mostly worry-free, Jarel remembered his dreams.

So, he became a working student. This was certainly more challenging than being just a kasambahay. During mornings, he would be in school but in the afternoon and evening, he would be working hard to support himself.

It was tough, especially during times when he also faced challenges in school. Yet he did everything he could to fulfill his dreams. He faced discrimination, especially from his relatives; it hurt but he didn’t let those hurtful words bring him down.

For many who laughed at his dreams and struggles, he was ‘just a kasambahay’ who’s dreaming dreams he could not reach but for Jarel, he was thankful that this proud kasambahay was able to reach his dreams, with flying colors at that!