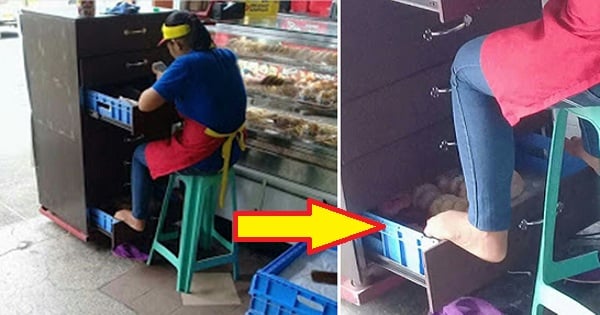 Mister Donut is among the popular donut stores in the Philippines and many parts of the world. The fast food franchise started in the US but has moved its headquarters to Japan. Today, Mister Donut has over 2,000 stores across the Philippines.

Recently, however, the company has gotten viral in the Philippines after one store employee was photographed with her bare feet resting on top of an open drawer filled with donuts! Yikes!

Of course, this is certainly against company policy but the tired employee has forgotten about food hygiene and safety. She probably thought no one would notice that her feet were resting just inches away from the food.

As expected, the photo garnered negative reactions from the public. Many just could not comprehend why this woman could even do this! Many expressed disgust; although others made a joke out of the situation.

Some commented that it was possible the bottom drawer was for donuts that might no longer be fit for consumption (such as old stock), it is still not a nice thing for the employee to do this as her action would certainly drag the company’s name into the controversy.

While the name of the employee and the branch in question were not mentioned, it seemed that Mister Donut has quickly identified the woman. After the post went viral, the company has released its official statement on the issue:

It has been brought to our attention that a post showing mishandling of our product is currently circulating the internet. We appreciate your concern about this matter and we would like to assure the public that the management is already doing an investigation and is coordinating with the concerned individual.

At Mister Donut, quality and safety of our products is our top priority. Any deviation from our standard processes and quality measures will be dealt with utmost importance. Rest assured that we are doing everything we can to ensure that this incident will not happen again in any of our stores.