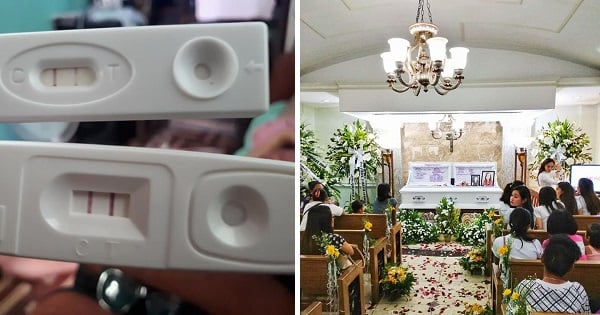 It is a sad reality in life that no matter how carefully we make our plans for the future, fate could sometimes play a joke on us and change those plans in ways that we certainly do not expect. Sadly, there are times when that meant losing someone or something valuable to you…

Christian John was ecstatic last May 28 when his girlfriend, Josanne Alejandro, confirmed that she was pregnant. It was certainly one of the most amazing news he has ever received in his life.

The following day, they went to the OB-Gyne at SM Bacoor and were quite satisfied with the check-up. It was just a normal day for the couple, Christian wrote in a Facebook post.

May 30 was an eventful one.

It was the day that Christian announced to a lot of people that his girlfriend was pregnant and that they would get married soon. He planned on proposing to her on their 5th anniversary on June 7, then get married the soonest possible time — perhaps the next month. He made sure that he got her family’s approval before planning the secret proposal with his family and friends.

That afternoon, he cooked her sinigang, the first time he had ever done that, to show just how much he loved her and how happy he was with their upcoming baby.

Nothing prepared him for what happened just hours later…

Perhaps it was premonition that led Josanne to message him that they should probably stop using the motorcycle in going to work but Christian didn’t think it was unsafe or that it was something more than just a pregnant woman’s worries about her unborn child.

As he took her to work in the early hours of dawn on May 31, they met accident. At 3:30AM, he lost his girlfriend and their unborn child.

It was the most heartbreaking thing for Christian, knowing that he was partially responsible for the loss — even if that was in an accident. Thankfully, Josanne’s family and friends didn’t blame him as they accepted that this was just an accident and that things happen for a reason, and because this was surely part of God’s plan.

A friend, Tonee Ponze, explained in the comments in behalf of their friends.

On June 6, a day before their 5th anniversary, he pushed through with the ‘wedding ceremony’. It was not your typical wedding because the bride could no longer say “I do” but Christian made his vows, with friends and family witnessing the ‘Symbols of Love’ he prepared for his late bride…

She was laid to rest on June 7, the day that they were supposed to celebrate their 5th anniversary; it was also the day he had planned to propose to her.

It was heartbreaking for him to lose both his girlfriend and their unborn baby but we are praying that he would find closure and that he could eventually forgive himself for what happened… Condolence, Christian!