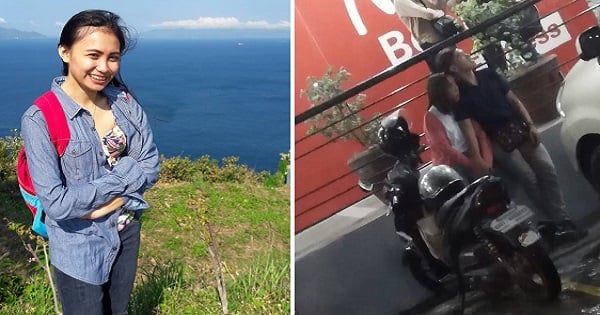 It was their 6th anniversary as a couple but what would have been a happy moment turned into heartbreak when Michelle Ann Trinidad found her boyfriend with another woman.

Michelle shared the experience on Facebook, calling out the guy and reminding him that it was their 6th anniversary.

She snapped a photo of the two and shared it on Facebook.

While other girls would have a scene and confronted the two, Michelle had experienced so much heartbreak in the past due to her boyfriend’s cheating that she let this moment pass, despite it being a special day for them.

And I just wanna let you know, masyado akong maganda para mastress sayo so stay strong sainyo. Wish y’all the happiness in life. Don’t worry, I’m not hurt. Still, at the end of the day. Ama ka parin ng anak mo. Maghaharap din tayo,” she wrote in a follow up post on Facebook.

While she’s trying to be tough, saying she no longer feels hurt seeing him with another girl, Michelle was seething with anger that her boyfriend (or shall we call him ex-boyfriend now?) still had the time and money to spend on a date with his new girl when he could not even spend time or give support to their child.

She also revealed that she was only feeling vengeful because he told his friends that it was her who cheated on him but it was actually the other way around.

“Di talaga porket may anak na poreber na,” she added – and we have to agree. It’s just so sad that the child had to grow up without a father…