Nobody would like to have their hearts broken, especially women. The emotional pain that heartbreak brings is excruciating. Nothing else matters and no one else matters anymore. It can be hard to function, to think or even to move. We feel the need to remove ourselves from everyone and be alone and trapped in our own shattered world.

So imagine what this poor lady feels after her boyfriend decided to cheat on her.

Her cheating boyfriend did not only break her heart, he also broke the highly respected “bro code” of any barkada, all in one night!

It is not new to us that a night of heavy drinking with friends can lead to a wild, mistake-filled night. Unfortunately for this poor lady, it was her who got the short end of the stick.

Thinking that it was just a simple night out with friends, the young netizen allowed her boyfriend to enjoy the night with his friends. But while she was sleeping soundly, a friend of hers sent her a message on Facebook. Little did she know that the night she thought is simple and peaceful will lead to a night full of heartache and heartbreak.

Although the concerned friend who sent her a message apologized several times, it turns out that her boyfriend kissed another girl. A photo of her boyfriend’s infidelity was sent to her as an evidence.

The heartbroken woman turned to Facebook. Her now viral post was filled with a lot of anger and emotions. She called out both parties. But the more shocking news is that she’s pregnant with her boyfriend.

What is more shocking is that the other woman turns out to be the girlfriend of the man’s friend. Although he knows that she is already taken, he still proceeded to kiss her.

By the end of the day, the man did not only lose his girlfriend, he also lost his child and his friend. 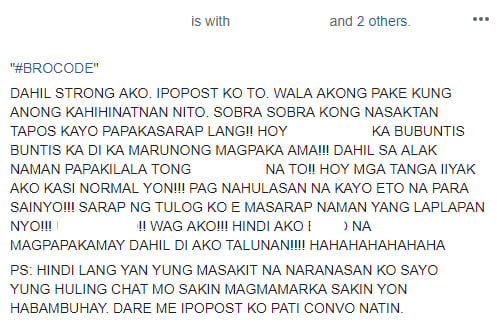 If this happens to you, what do you think you will do?