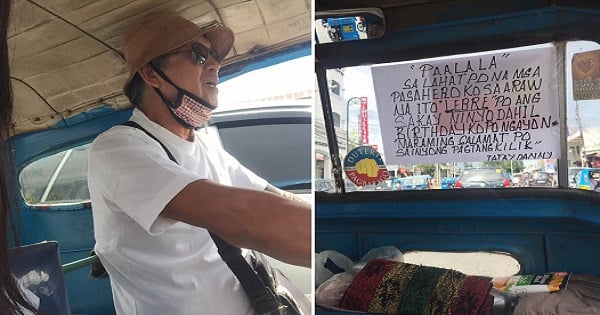 What’s the best way to celebrate a birthday? Well, all have different beliefs and choices in life but for some people, sharing their blessings and giving back to others actually make them happier than hosting a grand celebration.

A tricycle driver in Lagao, General Santos City had a rather unique way of celebrating his birthday.

Instead of hanging out with his family and friends or simply taking the day off to relax, Tatay Danny chose to get up early and drive his tricycle like it was just another ordinary work day; except that on this day, he wasn’t collecting anything from his passengers but actually giving free rides to anyone and everyone lucky enough to ride his tricycle.

His rather unique way of celebrating his birthday was shared on social media by Heart Sangalan who was among Tatay Danny’s lucky passengers of the day.

According to Heart, she was heading to Lagao from school and didn’t notice the sign in front of Tatay Danny’s tricycle. When she arrived at her destination, she handed the driver the usual fare of Php30 but was surprised when he smiled and told her to read the note.

Heart didn’t expect that a tricycle driver would actually be giving free rides on his birthday but Tatay Danny explained that he just turned 65 and he thought it was the best way to celebrate the occasion. Isn’t that wonderful?

Considering that tricycle drivers don’t really earn a lot of money, it was nice that Tatay Danny did this for his passengers. Happy birthday, Tatay Danny! God bless you always…