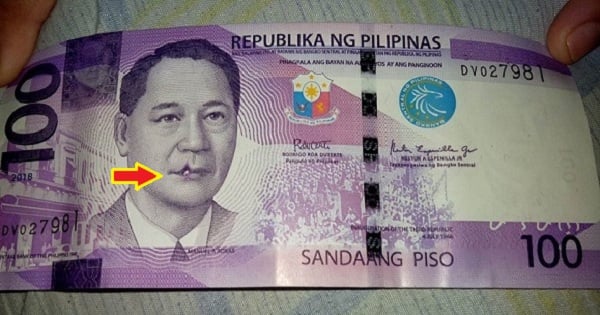 Remember how, some months ago, we laughed at the photos of the faceless Php100 bills and the pictures of former President Manuel Roxas taking a ‘vacation’ at the Mayon Volcano in another printing error?

Well, there’s another hilarious error, still involving Roxas. This time, though, he has a cleft lip!

Reina Jean Prescillas shared photos of the money that featured a rather different-looking Roxas.

While we are certainly not laughing at people with cleft lips, we are laughing over this epic printing error. How on Earth did this happen, anyway? We’re not really sure how that could be a totally innocent error, considering the stringent measures the Bangko Sentral ng Pilipinas (BSP) has on printed money.

When photos of the faceless Php100 bills as well as those of the doubly printed ones surfaced, it was easier to explain these as a machine glitch that might have caused these bills to skip the automated assembly line (resulting on the faceless bills) or wrongfully getting flipped and going through the assembly the wrong side up (resulting in the double printed bills).

In fact, it was so weird and unbelievable that many netizens slammed Prescillas for supposedly making fun of the former president by defacing the bill or, at least, editing the photo to make the money look this way.

But Prescillas insisted that she was telling the truth. She revealed that she received the money from an ATM in Quezon City last Tuesday. She did not disclose the name of the bank but revealed that she had already gone to the branch to report the unusual print on the money.