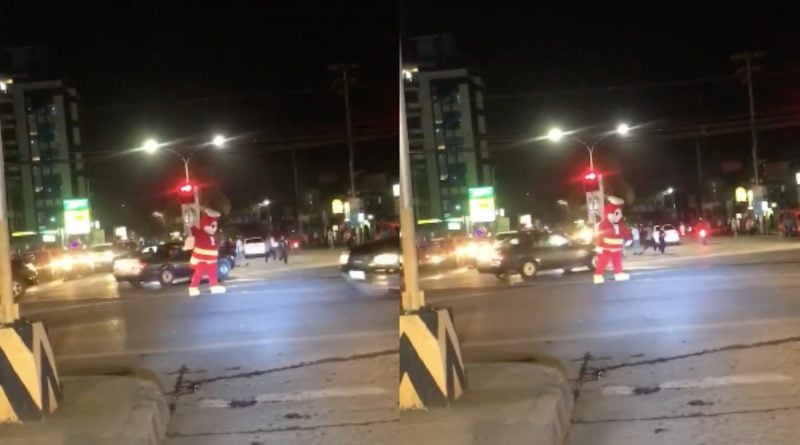 If you have been to a children’s party at Jollibee, you already know that a party gets happier and more enjoyable once the dancing mascot comes out. As soon as Jollibee starts to walk into the room and dance to the beat of the fast music, children go crazy and dance with him. Once Jollibee bursts out a move, every kid in the room looks at him and starts copying his moves. Well, we understand them: who can even resist the famous bee’s smile, right?

But if he is not attending children’s party or other events for the fast food chain, what do you think is Jollibee doing? Is he sleeping while waiting? Helping other crew in the kitchen? Or maybe he is in the accounting room, helping to balance the sheets and keep the financials on track?

Well, we did not expect that he has a different “sideline” whenever he is not making children happy during parties. In a viral Facebook video posted by a netizen named Jeff Parrocho, Jollibee is in the middle of the road, helping in keeping the peace and order. Instead of dancing to the beat in a room, he is regulating the traffic.

Jollibee serves as a traffic enforcer and making commuters and drivers happy by making sure that everyone follows the rules and regulations on the road.

If you are frustrated because of the traffic, your mood might change after seeing him dancing and happily helping other motorists. Just by looking at his “jolly” moves will make you feel as if you are in a children’s party.

This is definitely a good take in serving the public, especially in Metro Manila where there is traffic in almost any roads. But for motorists, be careful! You might hit Jollibee’s behind!