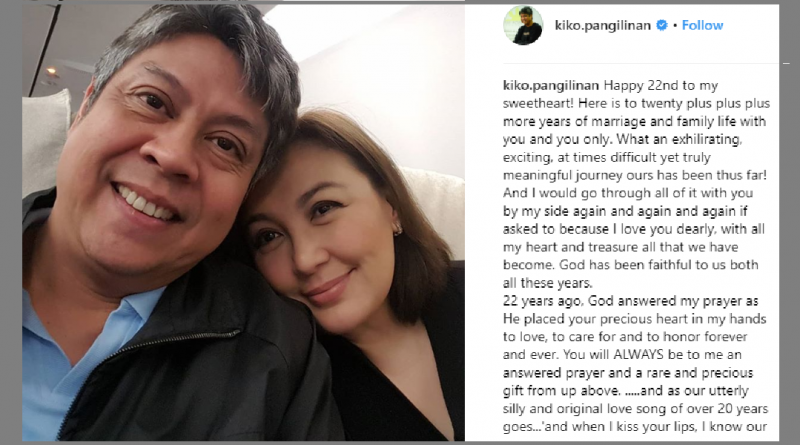 Senator Kiko Pangilinan revealed his sweet and romantic side of him when he recently posted a touching message for his wife Sharon Cuneta on Sunday, April 29.

His post was actually one day late since their actual 22nd wedding anniversary was supposed to be on Saturday, April 28. Sharon immediately explained the reason why.

[He lost his phone last night that’s why he posted it late. He was holding his phone the whole day but he chose to type in the evening. Luckily he found his phone.]

Happy 22nd to my sweetheart! Here is to twenty plus plus plus more years of marriage and family life with you and you only. What an exhilirating, exciting, at times difficult yet truly meaningful journey ours has been thus far! And I would go through all of it with you by my side again and again and again if asked to because I love you dearly, with all my heart and treasure all that we have become. God has been faithful to us both all these years. 22 years ago, God answered my prayer as He placed your precious heart in my hands to love, to care for and to honor forever and ever. You will ALWAYS be to me an answered prayer and a rare and precious gift from up above. …..and as our utterly silly and original love song of over 20 years goes…'and when I kiss your lips, I know our love's for kips (keeps)'…hahaha. @reallysharoncuneta

Sharon and Kiko had a simple celebration for their anniversary.

Unlike other celebs who celebrated their wedding anniversaries out of the country, Sharon and Kiko chose to make it simple but still special.

They were surprised with a special breakfast through the efforts of their children Frankie, Miguel, and Sophia.

A post shared by Coach:TheVoice.phActorSinger (@reallysharoncuneta) on Apr 27, 2018 at 7:06pm PDT

The megastar also received a bouquet of flowers from Kiko and proudly shared it on her IG account and said, “Thank you for my beautiful Anniversary flowers, Sutart. And for the sweet message. Hasn’t been an easy 22 years, but here we are still – and with our four not-so-little Gremlins! May God bless us and our family always. Thanks, Kikyoo! Love you my Dorkie. Happy 22nd!!! @kiko.pangilinan”

A post shared by Coach:TheVoice.phActorSinger (@reallysharoncuneta) on Apr 27, 2018 at 9:16am PDT

Congratulations to both of you!