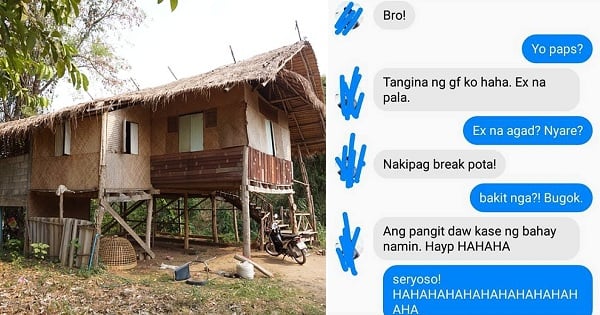 One girl broke up with her boyfriend after seeing his house; and this has received mixed reactions on social media.

Her ex-boyfriend half-jokingly called her a house digger – and the internet agreed! But others are saying that she’s just being practical.

Jayson Chavez shared screenshots of his conversation with a friend whose girlfriend left after she saw his house. While he didn’t share photos of the house in question, the two guys had a laugh over this ‘house digger’.

He wished his friend good luck in his future relationships and that he would find someone who wouldn’t be too concerned about the way his house looks.

In most cultures, it is the man’s duty to provide for his family – and that includes not just food but also shelter (a house), education, clothes, and everything they need. While that sounds a bit like gender stereotyping, it is still an expectation in many societies.

But what if a man could not provide these things, especially when you are still starting out and are not even married yet? Should you break up with him?

That’s a crazy question! A lot of ladies would say. Of course, if you love somebody, you will love him even if he couldn’t afford a house but what if you are only thinking of your future and wished to have a comfortable, nice house?

Is it fair to call this girl a house digger?

Well, if she really did break up with the guy over nothing but the appearance of his house, then she’s shallow and didn’t really love him. But she should watch out because a lot of poor people have improved their lives and went from rags to riches.

Who knows? The guy could become a rich man in the future and own not just one but many beautiful homes? But then, there’s always the possibility that he’s stuck with that ‘ugly’ house; however, despite the appearance of his house, he could actually provide her a better home…