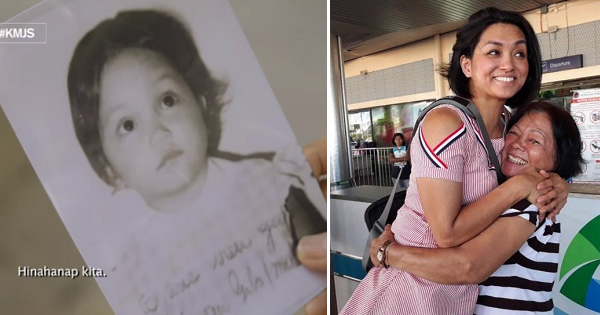 While many of them were loved and raised like real family, many adopted children grow up and search for their biological families. It is human nature to seek answers and to connect with family.

But happy reunions aren’t always guaranteed, especially when the adopted children live thousands of miles away their biological parents.

Caroline Van Gils is a Belgian woman who came to the Philippines to search for her Filipino parents but while she had a vague idea of where she was from, things were quite challenging because the only person to have encountered her as a baby already suffers from Alzheimer’s disease, reports GMA News.

How could she ever overcome such a huge roadblock?

Thankfully, Caroline’s story piqued the interest of netizens and the local media, including the “Kapuso Mo, Jessica Soho”. Soon enough, a lot of people pitched in to help her find her long-lost parents.

The search led her to the Dechino family from Bacolod; but the story took a rather interesting twist.

On October 9, 1979, the now-65-year-old Lelia Mahayag had given birth to a baby girl she named Connie Dechino in Bacolod. But because the baby was the product of her affair with a married man, she had to keep it a secret.

Keeping everything a secret, Lelia handed the baby to her cousin, Asuncion, but the latter panicked when the baby developed diarrhea. She immediately brought Connie to an orphanage where she was adopted by a Belgian couple and renamed Caroline.

“My adoptive mother gave me all the tools that I needed to have a good life. But the emotional concept was missing. The warmth of the family bond, I missed it,” Caroline said, to explain why she had always tried to find her biological family despite having a good life in Belgium.

After undergoing a DNA test, Lelia and Caroline were invited back to “Kapuso Mo, Jessica Soho” where they learned that they were, indeed, mother and daughter!