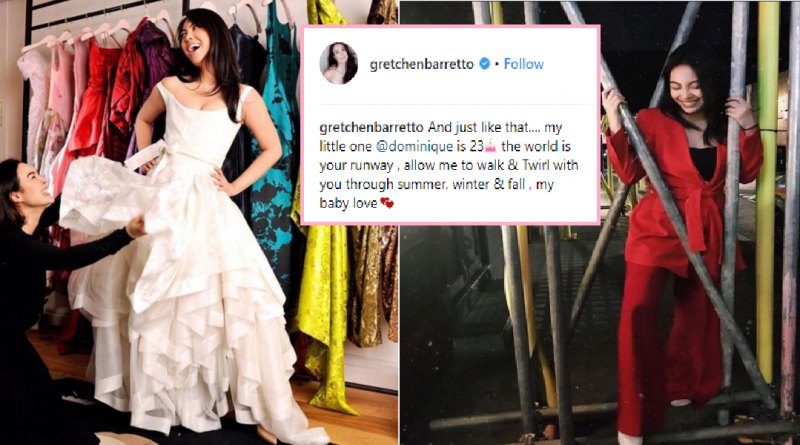 Moms nowadays oftentimes express their love by posting or by writing about their kids on social media. Just like some expressive celebrity moms, Gretchen Barretto posted a birthday message for her only daughter Dominique Cojuangco, who celebrated her birthday on April 22.

Dom, who turned 23, is Gretchen’s daughter with her long-time partner Tony Cojuangco.

The 48-year-old actress gave a reassuring message of how she will support and be with her daughter in all seasons of her life.

She captioned the photo of her daughter fitting a dress by British designer Vivienne Westwood’s shop in London with this message : “And just like that…. my little one @dominique is 23. The world is your runway, allow me to walk and twirl with you through summer, winter, and fall, my baby love.”

Perhaps, Gretchen told Dominique that the world is her runway since her daughter is a fashion designer. She gained a degree in fashion designing at the prestigious school in London, Istituto Marangoni in July 2017.

She launched her first collection in 2017 called La Doña, wherein her mom was her model. She designed jackets, tops and vests for her.

And just like that…. my little one @dominique is 23🎂 the world is your runway , allow me to walk & Twirl with you through summer, winter & fall , my baby love 💕