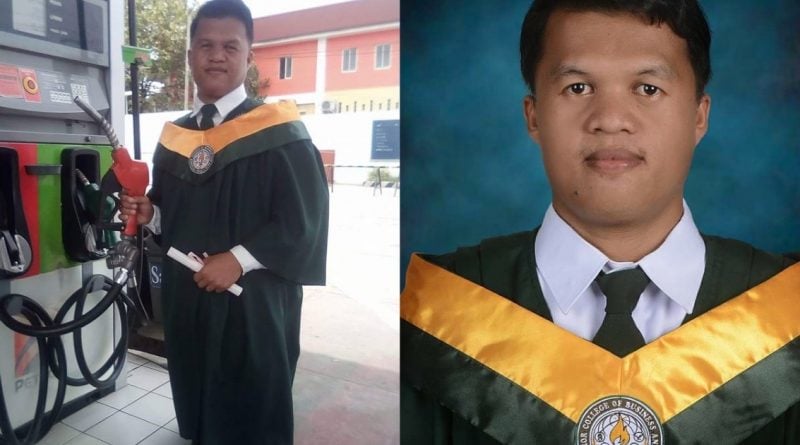 We are the master of our own destiny, so be it. Don’t stop believing and continue to soar high.

These are the words of a working student who is gaining commendations on Facebook after sharing his inspiring story of success, determination, and hard work to finish his studies. Agustine Salway catches the attention of social media users after posting a photo of himself wearing his toga while holding a fuel dispenser at a gasoline station.

From Struggling to Dreaming

According to Agustine, his reason for posting the photo online is to inspire other people, especially those struggling to finance their studies and from poor families like him, in pursuing their dreams in life. He reiterated the importance of education: it is the only weapon that we can use to change our future.

Agustine recalled how his father told him, while they are in the middle of cleaning their farm, that if he doesn’t want to suffer working under the scorching heat, he needs to study hard so he will hold a pen and paper in a cold place. During that time, as much as he wants to achieve his dreams, he thought this father cannot finance his studies since he has 11 other siblings.

Instead of just relying on his parents to pay for his tuition fee, Agustine applied for a job in Petron and became a working student. After years of sacrifices, determination, and never-ending thinking of his dreams, he finally graduated.

Enjoying the Fruits of His Labor

The hardworking student is now a proud holder of a degree in Bachelor of Science in Customs Administration from the Villager College of Business and Arts in General Santos City. Despite the long path he had to take, he did not allow poverty to stop him from reaching his dreams. After six long years, Agustine is now reaping the fruits of his labor.

Not only that, he is inspiring other people to continue achieving their dreams.

Are you inspired by Agustine’s story too? Share your thoughts in the comments section.