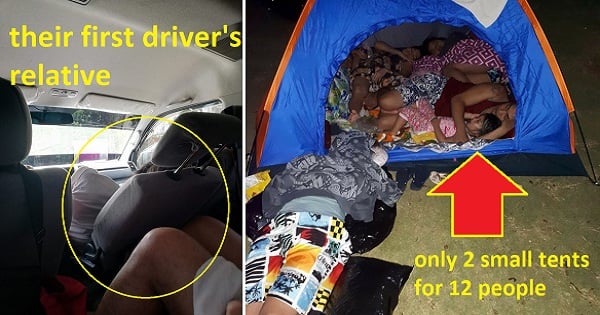 It’s summertime! While everyone is busy preparing for their summer trip, one family shared the bad experience they had with a travel agency in a recent trip to Calaguas in Camarines Norte, Philippines.

Paulyne Erica David and her family paid over Php25,000 to a travel agency for an exclusive vacation to Calaguas, ensuring that they get the van to themselves and will have four tents to use for an overnight stay on the island.

But the exclusive 2D1N trip for 12 people they booked from tour company Travel Galore for March 29 to 30 turned into a nightmare.

From the very start, the trip was a failure. The pick-up time was at 10PM on March 28 but the driver arrived over 2 hours late. Aside from being late, he was bringing along two female relatives, one of whom chose to sit at the front seat and recline her chair throughout most of the trip so she could sleep – even at the expense of the paying passenger sitting at her back.

The driver also made several unscheduled stops, further delaying their trip. Coupled with the massive traffic jams as everyone scrambled out of Metro Manila for the Holy Week break, the trip lasted for 19 hours instead of the 8-hour ride they were expecting. This resulted in them arriving at the Paracale Port at 5PM instead of the 6AM schedule.

They missed the boat because the last trip was at 4PM. They were supposed to spend the night on the island but because of the missed boat, the driver took them to a beach near the port where they pitched tent. But the driver only had 3 tents with him – and he gave one to his family members, letting the 12 vacationists squeeze into 2 tents.

Left with no choice, some simply used trash plastics as their sleeping bags.

Their food was also rotten, Paulyne claimed, and there was nothing to eat nearby except cup noodles and water.

At 5AM, they were finally able to ride the boat to the island. Since the driver said it was alright to do it, they left some of their stuff in the van, including several bags filled with clothes and uniform, power bank, milk formula, food containers, and some other items.

After spending 6 hours on the island, they already had to go back and ride the boat back to the main land. But their received more bad news.

“Our first driver who was also in Calaguas WITH HIS FAMILY said that he will not be the one to drive us home. BUT THERE WERE NO PROPER COORDINATION NOR ENDORSEMENT OF THE NEW DRIVER’S CONTACT NUMBER. AND WE WERE NOT. INFORMED THAT WE WILL BE USING A DIFFERENT VAN,” Paulyne angrily wrote later.

The weather was also not good at the time but they were only given seven life vests in the overloaded boat ride.

Back at the Paracale Port, they were dismayed that their new driver wasn’t around. After several attempts to call the travel agency, Paulyne finally reached one representative but was angry at the response they received.

Two hours later, the other van arrived. It was smaller than the first van – and the driver was once again bringing his family members! But instead of two people like the first driver, this one had four in tow.

Paulyne expressed anger at the exclusive trip that turned into a road trip with their drivers’ families. But she was angrier at the travel agency’s lack of empathy over their situation, with her calls getting cancelled or ignored.

“We did not spend our hard-earned money with this kind of service. WORST. Yes we did enjoy the beauty of Calaguas, but this is not how things were supposed to happen,” she wrote. “We paid more than 25,000 pesos and this is what happened.”