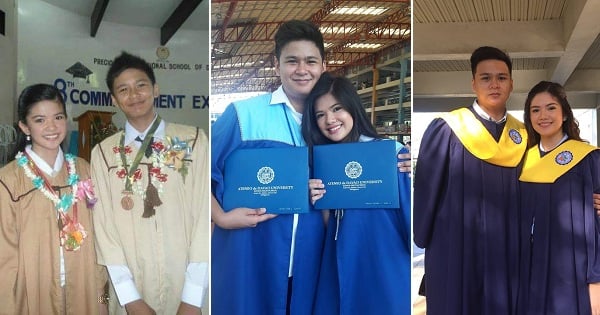 A lot of people frown upon seeing young lovers, especially those who are still in their elementary days – and we can’t really blame these ‘judgmental’ folks because teenage pregnancy is quite rampant these days!

Moreover, older people have this notion that relationships will only hinder these young children’s performance in school, making them have lower grades as they focus on their love or deal with fights and heartbreaks.

For couple Janica Eleria and Vande Alagao, however, their young love did not negatively affect their studies but actually had a positive impact in both of their lives as they both had an inspiration in each other.

The two met in Grade 2 when they became classmates after Janica transferred to Vande’s school, Precious International School of Davao in Davao City, southern Philippines. Perhaps it was love at first sight for Vande as he could still vividly recall Janica’s clothes and cellphone on that first day of school, even if this happened about a decade ago!

They became friends and eventually began texting each other in fifth grade. By October in sixth grade, they became a couple. Too young to be seriously in love? Well, at the time that was probably the case but they would soon make their puppy love grow stronger and become true love…

While Janica remained in their old school as they entered high school, Vande transferred to Ateneo de Davao University, she told When in Manila. They rarely saw each other even if they still lived in the same city and the schools were actually near each other.

But they were actually lucky to have parents who supported their relationship. By the time they were in third year high school, Janica’s mom decided to transfer her to Vande’s school where they would graduate together.

They also went to Ateneo Senior High School together – and completed the level together.

In college, they have chosen to go to the same school; although they would be taking different courses. Wouldn’t it be great if they end up still graduating together from this same school some 4 years from now, and that they would still be together as a couple? We’re looking forward to hearing that news!

Congratulations to you both, Vande and Janica…