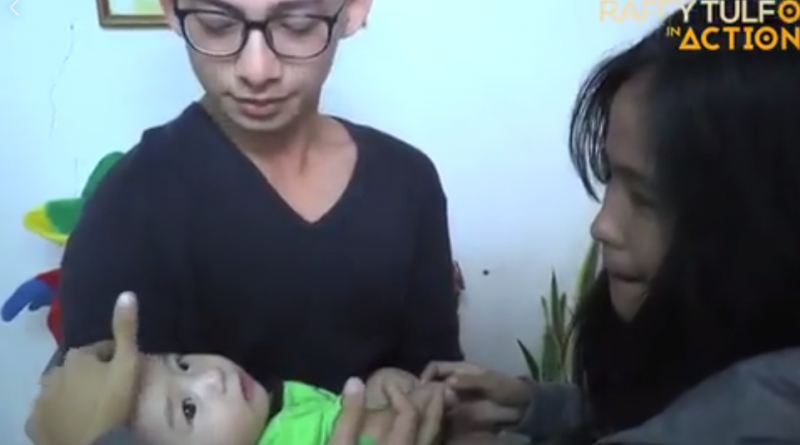 A young man and his mother went to Raffy Tulfo for help in retrieving a baby that was supposedly sold by his ex-girlfriend but things took an ugly twist when the latter revealed that he had asked her to abort the child!

David Alimpia sought the help of Raffy Tulfo in Action, bringing along his mother Ariane Hirakawa to the show. They alleged that his ex-girlfriend, Wenbie Correa, had sold the newborn baby without consulting them; they are hoping to get the baby.

It was really sad to hear that a mother, even a young mother, would have the heart to sell her baby – and Raffy certainly didn’t approve of that course of action but he would soon partially take her side and admonish the young man when Wenbie revealed that David told her to abort the child!

This time, Raffy asked the young man why he should still help them get the baby when he had actually wanted to kill it but his ex-girlfriend went against his wishes and kept the child. David admitted that he was confused and didn’t want to disappoint is mother but has changed his mind and now wants to raise the child.

Raffy said he admires Wenbie for not aborting the baby but because she did put it up for adoption by selling it on Facebook, hoping the baby would have a better future, she also made a mistake.

In the end, both parties agreed that David’s family will raise the baby and Wenbie waived her rights to the child.

While Mommy Ariane said she has forgiven Wenbie for selling the baby but won’t forget what she did, Raffy reminded her that it was actually her son who should be the one to ultimately blame because if he had gotten his way, the child would have been aborted and Ariane wouldn’t even have a grandchild to fight for!

What a complicated mess… Watch the video here:

Posted by Raffy Tulfo in Action on Wednesday, April 25, 2018