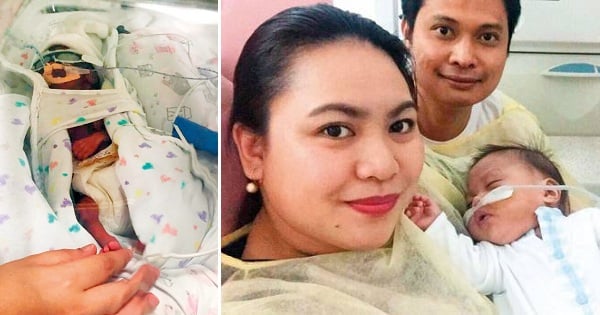 Living far away from home is challenging, especially when difficult situations arise such as getting sick but thanks to kindhearted people, things can become a little bit easier.

This was experienced firsthand by a Filipino family living in the United Arab Emirates. Far away from their families, Romeo and Charmyl Meneses battled anxiety after their son Ethan was born last October 4, 2017, at just 23 weeks gestation (a full term pregnancy lasts 38-40 weeks).

Baby Ethan spent his first weeks of life in the neonatal intensive care unit (NICU) at Prime Hospital before he was moved 22 days after birth to the University Hospital Sharjah (UHS) in Sharjah, UAE.

Just like many extremely premature babies, he suffers from bronchopulmonary dysplasia. He also experienced various complications and underwent numerous operations to save his life.

While Baby Ethan’s condition is improving each day, his hospital bills are also increasing. The mounting hospital bills are taking a toll on the couple’s finances; they were unsure whether they could still support their son’s medical needs.

Thus, the Meneses couple posted an appeal for help via Gulf News. Help poured in from the readers as well as from the paper’s staff, amounting to Dh6,040 (Php85,300) but this wasn’t enough to pay the bill which had already amounted to Dh481,095 (Php6.8 million) up to the end of February 2018.

But they were lucky that a generous businessman read the plea for help on Gulf News – and responded graciously!

“Ethan’s parents asked the public for assistance with this financial burden, last month. On March 18, an anonymous donor graciously donated Dh481,095, which covered Ethan’s care through the end of February. All of us at UHS and Ethan’s parents express our most sincere gratitude for the public’s assistance now and in the future,” UHS consultant neonatologist and medical director Professor Hakam Yaseen later revealed.

The donor chose to remain anonymous; although staff confirmed that he personally went to the hospital to pay the bill.

“I would like to thank the generous donor from the bottom of my heart for his kindness and generosity. I pray that God would bless him exceedingly. To everyone else who rallied support for our son, thank you,” Mommy Charmyl said.

“Thank you, Gulf News, for being the instrument for us to receive this blessing and hope. During our lowest moments, we just found refuge in God through prayer. God never failed us.”

Aside from paying the sick boy’s outstanding bill, the donor also pledged to pay for the remaining hospital bills that Baby Ethan will incur until the day he will be discharged. Isn’t that wonderful?

To this anonymous businessman, a great big thanks from the Filipino community!