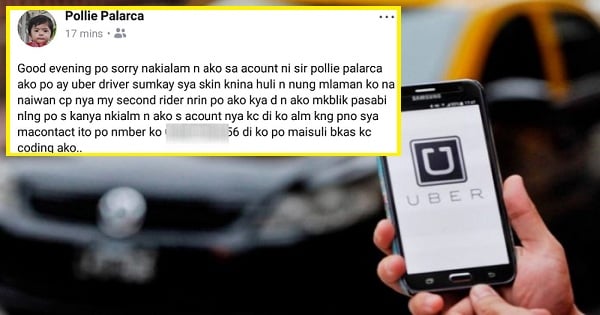 In these modern times, everyone seems to have a social media account – even ‘old people’ have Facebook accounts to connect not just with their children and grandkids but also with their friends. Indeed, social media changed how we connect with each other.

Social media is also a good tool for exchanging ideas and for helping others. Too many times we’ve seen how social media helped people find lost loved ones or even seek help from an endeavor, including saving someone’s life or providing donations to those in need.

Recently, social media also became a tool for an Uber driver to return the cellphone his passenger left in his car.

Last March 1, Pollie Palarca left his phone inside the car of Uber driver Rey Terana. The driver didn’t notice the phone until another passenger rode the vehicle.

Terana posted using the account, apologizing for doing this but admitted it was the only way he could think of to return the lost item. He left his name and phone number on the post but said he couldn’t also return the item the following day because his vehicle is ‘coding’, the term used in Metro Manila for days when certain vehicles are not allowed to ply the roads based on the ending numbers on their plates.

Palarca’s daughter, Maje Palarca, was amused over the whole thing and also thankful that her dad’s phone had been returned. She posted a screenshot of Terana’s post using her dad’s account, with the caption:

If not for this post, my dad wouldn’t have been aware that he left his phone lol. Thank you #Uber driver Rey Terana! Salamat! #seniormoments #UberPH

LOL. That was cute.