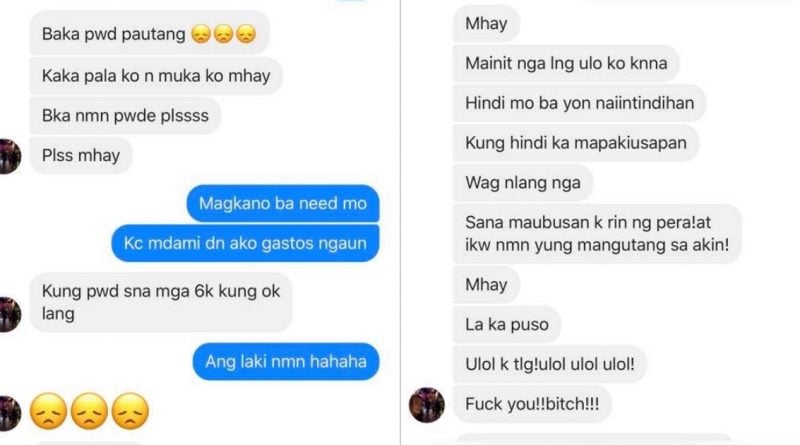 Based on a study, a borrower who tries to appeal to the prospective lender’s emotional side, by mentioning a family member’s needs, religion or marriage, are less likely to fulfill their financial obligations. Meanwhile, people who mention needs for graduation, school or weddings are likely to pay back the money they owe.

Whatever the situation is, people borrow money for a reason. Recently, a Facebook chat between two college classmates surfaced online and raised the eyebrows of several people.

A Facebook user named Fehm Garcia sent a message to her college classmate she calls Mhay. At first, it seems like a friendly conversation where Fehm was checking how Mhay is. She also commented that Mhay’s job is better than her’s.

The problem started when Fehm asked Mhay to lend her PHP6,000. Due to the big amount, Mhay apologized and said that she doesn’t have enough money to lend her since she is sending her children to school and her mother is currently on medication. Fehm is persistent to get what she needs. She even commented that since Mhay is paying for her kids’ tuition fees, it means they are studying in a private school.

However, she got offended when Mhay asked her where her salary is going. She started to say hurtful words to Mhay and even called her “selfish” for not lending her money. Still, the other party stayed very patient. Out of pity, she offered PHP1,000 to at least help with her needs.

But that did not suffice Fehm’s anger. She started calling her out since she’s fond of traveling.

Apologized For the Mistake

This is when Mhay revealed that they are not even close and she’s wondering why she told her that she misses her.

After telling Mhay that she will block her and will not talk to her again, Fehm sent her another message after several hours telling her that she will now accept the PHP1,000 she is offering. According to her, she was just cranky earlier and she really needs the money. How did the story end? Read the whole conversation here:

Have you experienced a similar situation before? How did you deal with it?