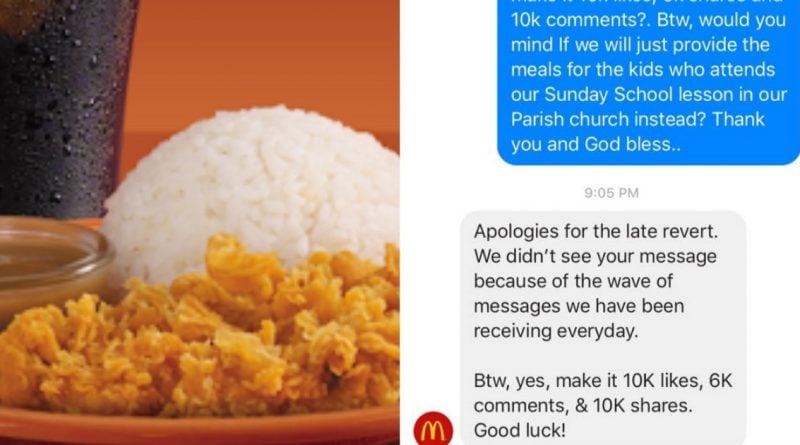 There are estimated 40 million small businesses using Facebook to promote their business and brands and to connect with their customers. For business owners, it can be a challenge to increase your customers but with Facebook, everything is made simpler. Just update your wall and people will start flocking your page and respond to your status.

More than 50% of advertising and marketing executives expect that companies will increase their investment in Facebook this year. But if you give up and stop updating your page, you may not easily see the results that you want. So for a business owner, customer engagement is important.

This is why the “likes for rewards” contest in Facebook went viral last year. Customers are asking business owners to give them rewards once they were able to reach the agreed number of likes, comments, and shares.

Viral For a Cause

A “likes for rewards” campaign is now gaining social media attention. In a Facebook post made by user Car Pontalba last year, she asked McDonald’s Doña Soledad for the opportunity to give 50 pieces of chicken fillet meal for homeless people in Parañaque in exchange of 5,000 likes, 3,000 shares, and 5,000 comments. This is in time for the Christmas season.

Due to the several messages received by the fast-food chain, they were able to respond after several months to Pontalba. In their response, McDonald’s Doña Soledad asked them to double the deal. In exchange for 10,000 likes, 6,000 comments, and 10,000 shares, they will give out 50 pieces of chicken fillet meal for the homeless people of Parañaque.

This deal will go on until the end of March.

Due to the kind-heartedness of the Facebook user, people were touched and happy to help with the good deed. As of writing, the post already reached the required numbers set by McDonald’s Doña Soledad. It already garnered more than 82,000 likes, 31,000 shares, and 27,000 comments.

It’s really inspiring to see people helping others who are in need. Hopefully, we will see more good deeds like this in the future.

How about you? How do you think you can help those in need? Let us know in the comments section below!