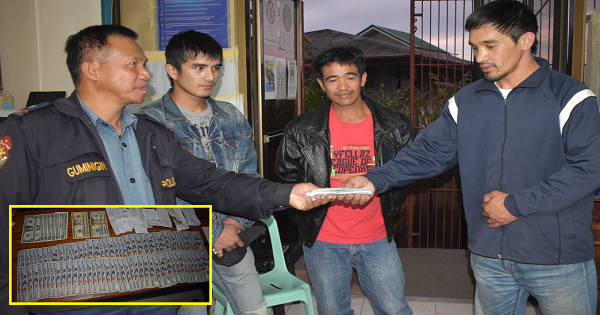 Php400,000 is a huge amount of money; that’s a fact. Despite this, however, a passenger and a jeepney driver didn’t feel tempted to pocket the cash when they found the bundle inside a jeep – and for that, they were praised.

Erwil Payangdo Agyapas was riding a jeep when he noticed a bundle left inside by another passenger. He picked it up and saw that it was cash in US dollars. He quickly notified the driver, Jimmer Antos Denson, about the money.

The two brought the bundle of cash at the nearest police station which happened to be at Tublay Municipal Police Station in Tublay, Benguet.

Policemen were able to trace and contact the money’s rightful owner, an overseas Filipino worker (OFW) who hails from Kapangan, a town next to Tublay.

Agyapas said he was happy that the money will be returned to the rightful owner, saying he wasn’t the least bit tempted to get the cash and that this was not the first time he returned money he found. According to him, he knows how painful it can be to lose money; thus, he knows the right thing to do is return it.

For their actions, Agyapas and Denson were rewarded some cash by Tublay Mayor Armand Lauro. The latter also commended the two, saying their names will be included in the roll of people who will receive awards during the town’s annual foundation day celebration in November.