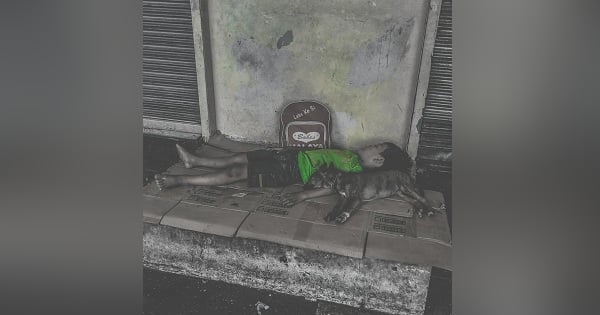 If you’ve walked in the streets of Metro Manila and other big cities in the Philippines, you must have seen a lot of homeless people living in the streets. Many of these people are carrying kids around but there are also a number of kids who are by themselves, long separated from their families or perhaps orphans.

A number of these kids don’t really have a family, with some resorting to adopting pets to have a semblance of ‘family’ and to ease their loneliness.

Homeless Kid ‘Adopts’ Stray Dog So He Wouldn’t Be Lonely, Treats It Like a Brother

Aside from that kid who adopted a stray dog so he wouldn’t be lonely, another kid appeared to have done a similar thing.

Ian Chioco shared a photo of a sleeping kid who was beside his dog. Both were resting on flattened out boxes outside a business establishment in Cubao, Quezon City. According to the netizen, he spotted the boy at the UV Express stop point near Puregold.

Touched by what he saw but unable to help at the moment, Chioco posted the boy’s photo on social media with a poem he penned as caption.

But while he was unable to help out at the time, a number of people expressed willingness to help the kid. One even said she was willing to adopt the kid and his dog. Thanks to his post, this kid and his dog just might have a real home soon…