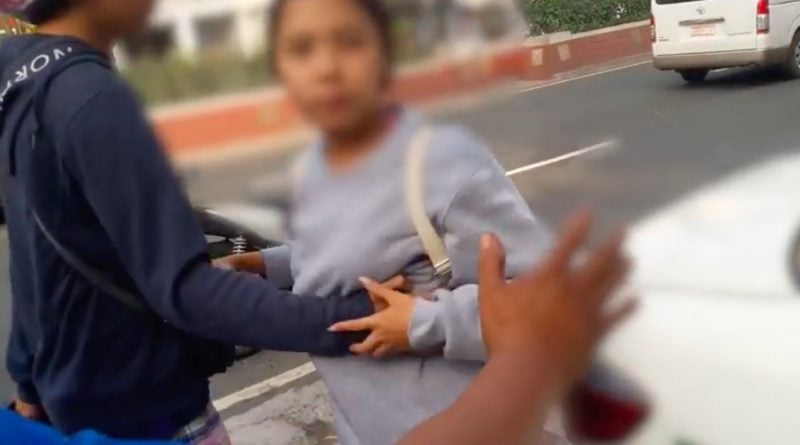 Following traffic rules is an important skill not only for new drivers, but also for old ones, yet a lot of veteran drivers still seem to lack it. Other than reading and following traffic lights, it is also a must for drivers to wear seatbelts when driving.

Meanwhile, if you are a motorcycle driver, you must wear a helmet all the time. If you are riding with someone, the rider needs to wear a helmet as well. Helmets are protection for the head, in case an accident happens.

Failure to wear a helmet while driving on the road can result in repercussions. First offenders will be punished with a fine of one thousand five hundred pesos (PHP1,500.00) while repeat offenders need to pay up to ten thousand pesos (PHP10,000.00) and confiscation of the driver’s license.

Not Everyone Understands Traffic Regulations

However, it looks like not all people would agree in following traffic regulations. In a Facebook video posted by Gadget Addict, a couple was stopped by a group of traffic enforcers after not wearing a helmet on Road 3 in Visayas Avenue. The enforcer clearly informed them that wearing a protection is important because it is for the protection of the rider.

The enforcer also reiterated that it is the couple’s second time to get a ticket. Just a few hours before, they also received a ticket for the same offense. However, the woman started to become abusive and complained that one of the enforcers is laughing at her. Although the process was clearly explained to the couple and even asked for the name of the person, the lady is still cursing.

When asked why they are not wearing a helmet, they said that they used it to hold the food they purchased.

Since one of the enforcers is taking a video of the whole incident, the woman started cursing at him and even tried throwing the helmet to the officer.

The woman behind the said post is named Chezka Bautista and working as call center agent in Alorica. If proven guilty, she might face charges of assault.

You may also watch the video here:

This video might not be suitable for young children due to bad language and a little violence. Thank you to JV for sharing this video and for keeping his composure while being attacked by this girl.Back Story: – This motorcycle was originally stopped on road 3 for not wearing helmet.- The lady became abusive and complained that she thinks one of the enforcers is laughing at her.- They explained the complaints process to her and gave her the name of the enforcer that she thinks is laughing.- They issued a ticket and moved on, because she's cursing at them. There's no value in trying to talk with someone when they're acting like that.The Video:About 15 minutes after the first ticket, they came across the same motorbike on Visayas Avenue and noticed the girl still isn't wearing her helmet. Why isn't she wearing her helmet? – ”Eh may binili kaming ulam (at sa helmet nilagay)”

Who do you think is the issue in this case?