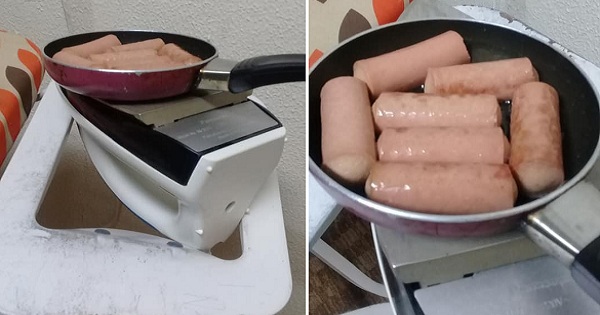 While there are many who think that overseas Filipino workers (OFWs) have a glamorous, high-paying job that also allows them to travel to many parts of the world, the reality is rather harsh. There are those who enjoy those mentioned above, of course, but many are also stuck with selfish, abusive employers.

An OFW working in Khobar, Saudi Arabia recently went viral after sharing photos of how she was able to find a way to cook a meal inside her room because her selfish employers won’t give her enough food.

There are those who say she’s just making it up but a lot of OFWs can actually relate, commenting on her post that they also have selfish employers who don’t give them enough food but still expect them to work like a horse.

Posting under the handle Red L Lee, the domestic helper lamented how difficult it was to have a selfish employer who wouldn’t give her food. What’s worse is that this employer can actually detect whenever she cooks something in the kitchen for herself, even if it is just egg!

So, to have something to eat and give her energy to work, she’s taken to cooking food using the electric iron in her room. Thanks to this neat trick, she is able to enjoy hot food without her employers knowing she’s been ‘cooking’.

It’s sad that she and many OFWs have to go through this difficult situation to earn money for their families. We could only hope life would be much better in the Philippines so that workers like her won’t have to go far and work under selfish foreign employers to support their families.