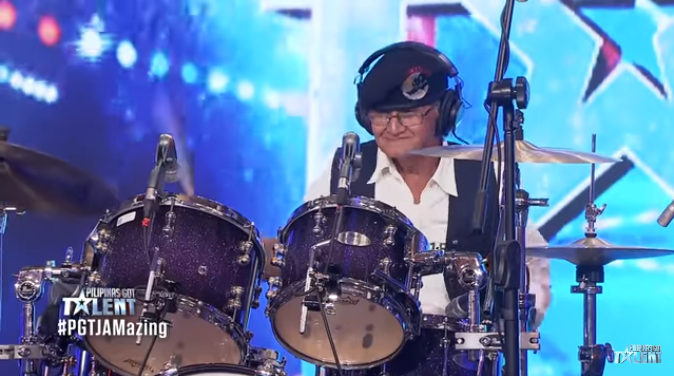 A 68-year-old man wowed the judges and audience with his energetic drum performance on “Pilipinas Got Talent”.

While the performance didn’t earn him the golden buzzer, Tatay Ernesto Chuidan from Capas town, Tarlac received four ‘yeses’ from the judges who were greatly impressed by his performance.

His audition started off with some laughs as he nervously told the judges he’s from Manila although it turned out he was actually from Tarlac. Behind the scenes, Tatay Ernesto reportedly admitted he could barely recall how many grandchildren he has now but when he started his performance, it was clear that drumming is in his blood and something that he isn’t likely to forget how to do.

All the judges praised Tatay Ernesto’s performance, especially considering that he had chosen a rather fast piece to show off his talent. It would have already been challenging for a young drummer but for Tatay Ernesto’s age, it was really quite impressive!

Amazed by the old man’s performance, Robin Padilla did not just give him a standing ovation, the judge also hurried to the stage to give him a hug.