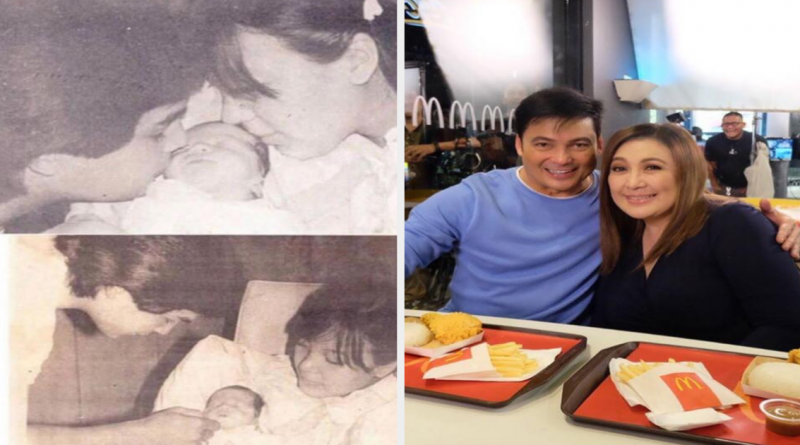 Avid fans and supporters of former love team and couple Sharon Cuneta and Gabby Concepcion felt “kilig” upon learning that their idols were working together for an endorsement project of a US-based fast food chain.

On February 7, Megastar Sharon Cuneta posted a throwback photo of their family with Gabby Concepcion.  It was a photo taken when their only daughter Maria Kristina Cassandra “KC” Concepcion was born.  In her Instagram post, Sharon wrote:

“Goodnight, Cassandra Concepcion Kaycee-Waysie. I Love you so much, mija. Dulces sueños. Goodnight a tu papá también. (Sweet dreams. Goodnight to your dad too.)”

Looking back, Sharon and Gabby were among the most famous love teams during the ‘80s until early ‘90s.  They first teamed up in the movie “Dear Heart” in 1981. Because of its success, it paved a way to another movie “P.S. I Love You” which was also shown in the same year.

Their on-camera love team turned into reality when they become real-life sweethearts.  On September 24, 1984, Sharon and Gabby tied the knot on a ceremony everyone had wished for a happy ending.

The Megastar gave birth to KC on April 7, 1985.  Sad though, their relationship ended when they decided to live separately 3 years after.

Now, Sharon and Gabby are living happily with their respective families.

Meanwhile, the ex-couple’s daughter KC took to social media her happiness upon learning that her dad started following her mom on Instagram.

The TV ad of Mc Donald’s is the first project of Sharon and Gabby after 26 years from the time they did the film “Tayong Dalawa” in 1992.