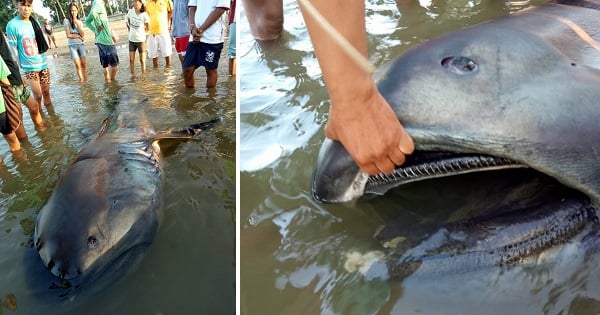 Just a few hours after a megamouth shark washed ashore in southern Negros Oriental, photos of the creature went viral, with quite a number of netizens fearing this was yet another sign of an upcoming disaster in the locality.

With Negros Oriental, particular the areas near the foot of the Cuernos de Negros (locally known as Mt. Talinis) experiencing a swarm of earthquakes since January, many believe that the ‘big disaster’ that might come is that of the volcano’s eruption.

Since January 1, 2018, there had been over 100 earthquakes recorded in the vicinity of the volcano; however, the swarm was merely attributed to the movement of plates, particularly along the fault line traversing Sibulan town to the southwest part of the province, reports Mary Judaline Partlow via the Philippine News Agency.

On the same report, Professor Francisco Ablong, Jr. was quoted as saying that there was a possibility that the earthquakes had links to volcanic activity; although Mt. Talinis has not erupted in thousands of years.

Ablong declared, “I am more inclined in saying that validation should be made on some kind of magmatic movement under the base of Cuernos de Negros.”

“Phivolcs should come here, bring instruments, and stay there for a period of weeks in order to do a geophysical survey of the current condition of Cuernos de Negros and its surroundings.”

In a post on his personal Facebook page, the Earth Sciences professor expressed hope that the PHIVOLCS will prove him wrong.

This Sunday, a megamouth shark was discovered in the shores of Bayawan City. Could this mean that Ablong’s fears just might happen soon?

Well, experts have long warned people not to believe in the superstitious beliefs that strange or rare sea creatures can predict earthquakes or some other natural disaster. However, people could not help but feel worried, especially because the appearance of strange deep sea creatures in the Philippines last year came just days before earthquakes struck nearby…