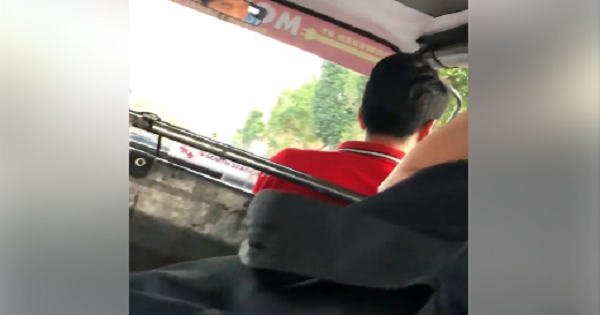 There is this adage, “The customer is always right” but time and again this had been proven to be not applicable in all cases.

An angry commuter shares the video he took of a fellow passenger who angrily berated the driver for not stopping in front of him, making him walk some 5 steps before stopping the e-jeep. The unnamed commuter angrily told the driver off, saying he should not make his passengers do that but the other passengers came to the driver’s rescue.

Val Cordial and the other passengers blasted this newer passenger, telling him that the driver couldn’t just stop right in front of him and while he had to walk to ride at the front seat of the e-jeep, it was only a few steps and not even a kilometer!

This new passenger got mad at the others for interfering as he berated the driver, telling them they had no right to do so as they were not feeding him! But what really irked the other passengers was when the ‘may pinag-aralan’ (finished a college education) was included into the issue.

The new passenger proudly told the driver that he has a diploma – this earned him more haters on social media because people commented that it isn’t about how high your educational attainment is but how you deal with people that matters in life.

The passengers would soon argue over the companies they are working in. While some people commented that the other passengers shouldn’t have made things worse by arguing with this disrespectful guy, many took the side of the driver and the other passengers, saying it was right that this guy was taught a lesson.

What do you think of this now viral video?