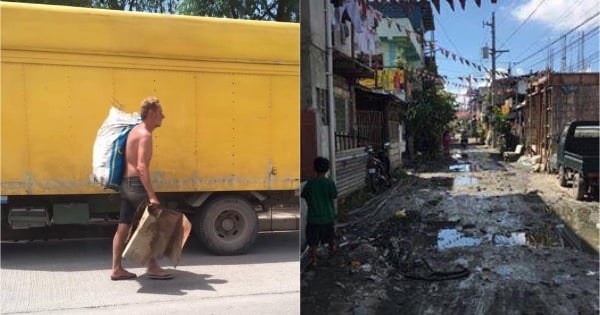 A lot of Filipinos have happy endings after getting married to a foreign national. Many of them are enjoying happy relationships and strong family ties. But there are things that started as romantic ones but end up as tragedies. Some loving relationships that started with love end up because of selfish gains.

Take the struggle of Kristoff, a German national, who struggled after his Filipina gold-digging wife abandoned him after getting his money.

Left After Getting His Money

The 49-year-old German is in the Philippines with no money which forced him to take shelter at a small chapel in Mandaue City. He lived in the same city with his Filipina wife for eight years before the woman abandoned him when all of his money ran out.

In one of the viral photos, Kristoff is seen shirtless while carrying a piece of worn-out box and a sack. The sack contained things that Kristoff found from scavenging the trash bins around the village where he’s staying. He sells these items to help him survive day after day.

The story frustrated a lot of netizens who claim that Kristoff’s gold digger wife scarred the reputation of the whole nation. A lot of netizens suggested different ways to help out the German national so he could return back to his home country. However, things may not turn out the way a lot of people wants it to end.

When the netizen who posted the viral story, Anja Wiberg, tried talking to the German citizen and ask him how he could be helped, he became skittish and stopped talking to her. Because of it, some netizens cannot help but wonder whether the story is true or not.

What can you say? Do you believe that Kristoff is truly left by his wife? How would you deal with this?