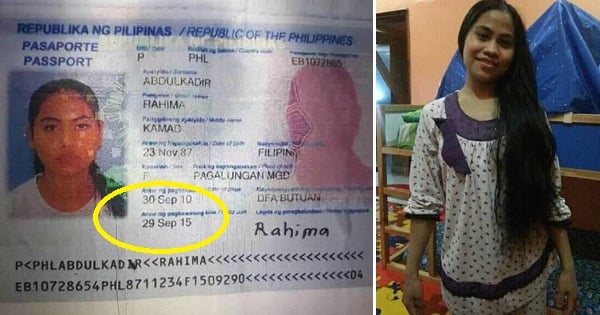 As hundreds of families found relief in the homecoming of their family member who used to work in Kuwait but had been abused or experienced troubled in the foreign country, there are also those who are fearful that they will never hear from theirs ever again…

Facebook user Lemien Ho Lee made a plea for help in finding his sister, Rahima Abdulkadir Kamad. In the post, Lemien revealed that his sister had gone to Kuwait in 2010 but hasn’t come home since then.

The last time the family had talked to Rahima was during the last day of Ramadan in 2015. While he did not say whether his sister was abused in Kuwait or had told them about feeling fearful about her life in the foreign country in the past, the most tell-tale sign that such happened was the woman’s failure to come back to the Philippines.

The family holds a copy of Rahima’s last known passport which expired in September 2015.

In light of recent events, including the discovery of a Pinay domestic helper inside a freezer, Rahima’s family fears that she had suffered a similar fate. But they remain hopeful that she is still alive.

According to a report on OFW News Beat, the family had no way of reaching Rahima because her employer prohibited her from owning one. But 3 years is a very long time to not get in touch!

The family had already sought the hotel of the OWWA office in Cotabato but they were only told to wait – and they had certainly waited for a very long time. They also tried asking for assistance from Raffy Tulfo in Action but were told to go to the action center or send a representative; but because they couldn’t afford to take the trip from Pikit, North Cotabato to Manila, they have decided to give up on that option.