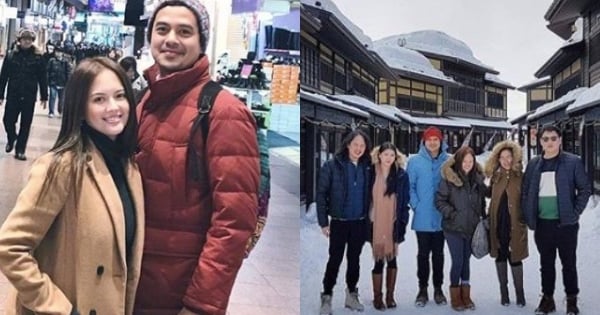 All is well with the controversial couple.

One as a Family

In an Instagram post of Kim yesterday, February 26, she uploaded a photo of her husband together with Rico and Louise, and the speculated couple, John Lloyd and Ellen. The caption she used caught the eyes of netizens: Fammm. Does this mean that John Lloyd is already part of their family?

John Lloyd’s group flew to Japan last February 20th for vacation and are scheduled to return to the country today, February 27.

Are They Legally Married?

Until now, there is no confirmation whether there is a civil or church wedding that happened between the star couple. According to PEP, it appears that John Lloyd and Ellen held their wedding during the eve of the Chinese New Year, February 15. Although Quezon City Mayor Herbert Bautista confirmed that he did not officiate any events for the controversial couple (but he will be very happy to do so), a lot of people are still thinking and hoping that the beautiful couple will tie the knot soon and end the never-ending questions that people have.

Many people also notice the growing belly of Ellen. As per the entertainment website, if the rumors are true, she is already six months pregnant with her first child with John Lloyd.

After the rumors spread that the two are in a relationship, there are many assumptions about them: from marriage to a possible baby. However, John Lloyd and Ellen are very private, but by looking at them, they look extremely happy together.