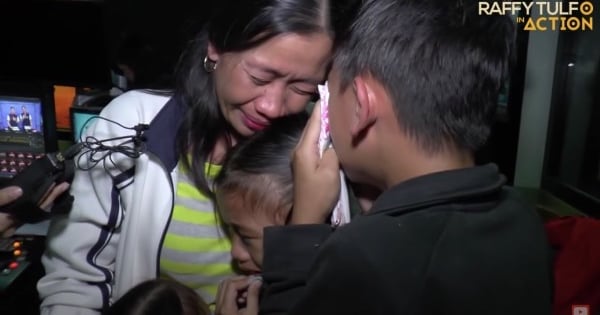 Nobody would like to see their families broken. If parents decide to separate, the most affected ones are their children. Unfortunately, there are difficult times when couples can no longer stay together, even if the other party still wants to reconcile, and by choice, to live their lives separately.

This was the case with a mother and OFW,  Surla Bautista.  Her problem with her husband came to a point where she no longer had a choice but to ask help from a public service TV show, Raffy Tulfo in Action, to talk to her husband and to fix their family problem. According to Surla, her husband has had a mistress as far back as when she was still working overseas. She had asked her husband to be discreet, but he did not care as there were times when he even took the mistress along as he went out with his children.

One day, she finally gathered the courage  to ask help from the public service show after her kids witnessed her husband beating her.

What hurt her even more is that her mother-in-law knew about the affair, but was told to keep quiet. However, she could not keep it to herself any longer as the affair has been going on for two years.

Trying to Fix the Problem

The Raffy Tulfo in Action team, together with Surla, went to her husband’s house to try and fix the problem.

Her husband refused to cooperate and ended their marriage right there instead, and chose to be with his mistress instead of his family.

To make things worse, he asked their children to choose between him and their mother.

While the children were packing their belongings and getting ready to leave, their grandmother collapsed, crying due to the pain she felt. She simply could not bear to see her grandchildren, who lived with her, being taken away.

After seeing the video, netizens were outraged and expressed anger towards the husband, and sympathized with mother, her children, and their grandmother as well.

It is simply heartbreaking to see the children and grandmother cry as they part ways,  and will make anyone watching feel the pain.