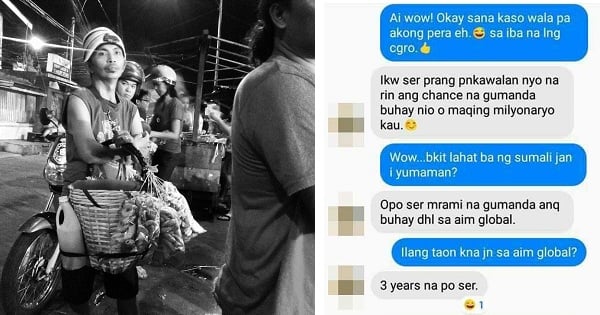 There’s money in networking, many networkers will attest to that – and they would readily show you photos of grand mansions, fancy cars, international holiday destinations, and checks bearing large amounts of money.

But the truth is that networking is not for everyone and there are some networkers who can get so insulting in their supposedly passive-aggressive approach in trying to convince their prospects to join their network.

One balut vendor recently went viral for his witty remarks against a networker who was trying to convince him to invest in the business.

Everyone knows a balut vendor isn’t rich and might not have a fancy house or even own a car but this one just won this text exchange with a networker.

It was the networker who first messaged him, asking what his job was. When he told the networker he’s a balut vendor, he was offered extra income on Aim Global if he invests Php6,980 in the business.

The balut vendor had a witty comeback after the networker told him he’s throwing away the chance to get rich and become a millionaire if he doesn’t join the business. He pointed out that the networker had been in business for 3 years but still wasn’t ‘rich and a millionaire’ at this point.

Moreover, the vendor pointed out that he has sales everyday just by shouting ‘Balut! Balut!’ but the networker can’t say the same thing. LOL. At the end of the conversation, he joked that perhaps it was the networker who should invest in his balut business.

The exchange went viral on Facebook page, Pepeng Pinakamalupet. It gained mixed reactions as there were a lot of networkers who blasted the balut vendor for ‘thinking small and remaining poor’ while others said the balut vendor was right. What do you think?