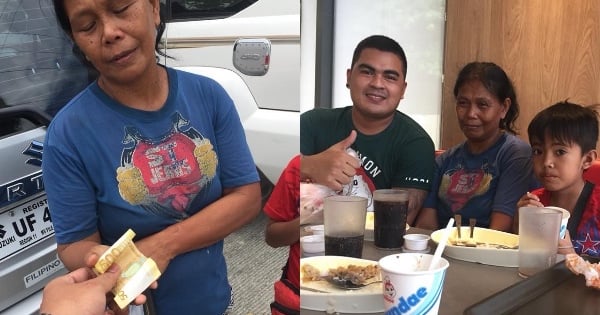 In a world where everyone in the country is trying their best to make both ends meet, it is heartwarming to know that there are still some people who are always willing to extend a helping hand. When you read news of people helping others who are less fortunate, it is really moving and inspiring.

A small good deed made by a Facebook user named Daniel Eugenio recently went viral when he decided to become a Good Samaritan to a struggling mother and her son. In a post that he shared, they went to Jollibee, a popular fast-food chain where he had a small talk with the mother.

What Is The Story All About?

Daniel shared the tear-jerking story of the mother and son. He saw them sitting outside the food chain when he was about to fetch his nephew.

A few moments later, he went back to the fast-food chain and noticed the mother and the son were still in the same spot where he saw them earlier. After introducing himself, he invited them to eat inside since he is suspecting that they came somewhere far and are already starving.

While they were eating, the mother could not contain herself and cried while talking to Daniel. For some people, eating in a fast-food chain may be normal but according to the mother, it’s their first time eating in Jollibee. After spending some time with the mother and son, Daniel also gave money to them for transportation.

Netizens praised Daniel for being a Good Samaritan and for helping the mother and son without expecting anything in return.

Have you experienced being a Good Samaritan? If you are in Daniel’s position, will you do the same? Share your thoughts and opinions in the comment section below.