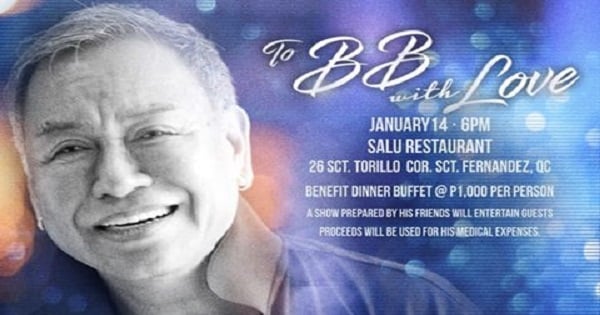 January is the birth month of veteran Pinoy actor Bernardo Berdardo, popularly known as ‘BB’. But what was supposed to be a joyous month has become a struggle for the actor after he was diagnosed with tumor in the pancreas.

With the tumor potentially being malignant plus his history with clinical depression, BB has appealed for prayers from his Facebook followers and fans he calls as the ‘FB Prayer Warriors’.

BB: January is my birthday month and I have a “Little Lambing” to my FB friends: “Please say a little prayer for me.”

Because: I strongly believe in the power of prayer.

Because: Given my history of clinical depression and anxiety attacks coupled with a potentially life-threatening growth in my pancreas, it feels like it’s about time to call for support from FB Prayer Warriors.

The actor has been among the popular comedians in this time but he was very serious when he appealed to the public for prayers.

He explained that after a series of lab tests, including an ultrasound and CT scan, he was told by doctors that he has a tumor which is possibly malignant. The tumor is growing in the head of his pancreas, threatening to affect the bile and pancreatic ducts.

Because of his condition, he has lost is appetite and has subsequently lost his weight at an alarming rate. BB revealed that he is set to face more lab tests, including an endoscopic ultrasound coupled with fine-needle aspiration biopsy which will be used to check whether the tumor is malignant or benign.

It is also possible that he will undergo more lab tests before the doctors will schedule him for a life-saving surgery.

Despite the gravity of the situation, BB remains hopeful that he could emerge victorious from this huge challenge.

We will deal with the abnormal growth of tissue next. One step at a time. One day at a time. That’s the “In The Moment” Snap Shot of my medical prognosis, thus far.

But cameras are kind. They do not capture the very real pain and fear of the unknown, the hidden costs of this medical journey that has put me in Controlled Panic Mode. I know that in order to continue to fight this battle — I need Courage. I need Strength. I need Clarity of Mind.

Which is why, heart to heart, my friends, I hope you will find time to say a little prayer for me.

Maraming Salamat and God Bless us all!

In response to BB’s call for prayers, his friends had organized fund raising events to help cover the costs of his lab tests and medical treatments.

On Sunday, January 14 at 6 PM, there will be a benefit dinner buffet at Salu Restaurant in honor of BB, aptly entitled “To BB with Love”. His friends are preparing a show to entertain the guests and patrons of the benefit buffet which costs Php1,000 per person.

All proceeds of the benefit dinner buffet will go to BB’s medical expenses.